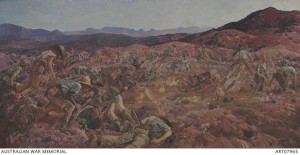 On a recent visit to the Australian War Memorial, I was surprised at the visual density of ‘classic’ war art. In the paintings of George Lambert (World War I) and Ivor Hele (World War II), the combat is hand-to-hand. The viewer is in the thick of it, given the now-familiar first-person shooter point of view. Soldiers writhe and wrestle, the mud flies and the casualties pile up. Whatever the artists witnessed in the field has been retold in the voices of Tintoretto, Michelangelo and Signorelli.

In an age of abstracted conflict—borderless wars, remote weaponry, cyber-attacks—there’s a pervasive air of studied remoteness. The twenty-first century war artist is denied the physicality and materiality of classic war art. The war artist’s capacity to witness is diminished. The enemy is difficult to name and is often never seen. An embedded artist is restricted to base or escorted on carefully framed tours of secure zones.

What the war artist sees is often the aftermath of conflict, narrated from one side of the wire. The story is self-consciously suspended within the managed framework of intervention, ratification and containment. Commemoration substitutes for reflection and is larded with populist investments in national identity. 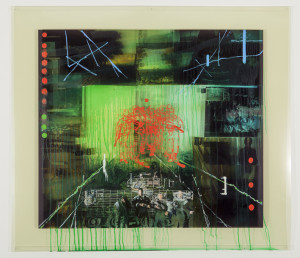 Lyndell Brown, Charles Green and Jon Cattapan, who have all worked as official Australian war artists, approach the over-determined field of conflict art with caution. Conflict is now a kind of screen culture; filtered through the artist’s digital camera, military surveillance technology and the myriad viewing devices of a global, domestic audience. As the artists remark in their book Framing conflict; ‘The virtual and physical, and narrative fact and narrative fiction, shade into one another’. 1

Long-time collaborators Brown and Green were deployed in Iraq, the Persian Gulf and Afghanistan in 2007. Cattapan was posted in Timor Leste in 2008 as part of the International Stabilisation Force associated with the nation’s transition to independence. Their collective experience has been elaborated in Australian Research Council-funded research on conflict art and in their triple collaboration in joint exhibitions at Station and ARC One.

Reflecting on the current status of conflict art, Brown/Green and Cattapan identify a succession of challenges. The remoteness of conflict makes for artistic quietism, whether in abstraction, aestheticism or the evasiveness of day-in-the-life genre scenes. Conversely, any and all images can be deemed an act of violence, as when Ariella Azoulay declares that ‘violence is inherent in the instrumentalization of the photographed person in order to produce an image of him’. 2 In addition, the artists note, ‘conflict art’s affective power to shape actual understanding itself seems to have diminished in the west since Vietnam’. 3

As a general rule, artists tend to declare the problems before leaving their practice to do the talking. For Brown/Green and Cattapan to declare their solution would be more than a spoiler, it would short circuit an encounter in which the viewer can develop understanding. Some broad strategies are declared in Framing conflict: a muted stillness that leaches out action and resolution; a layering of images into a ‘scrappy atlas of history’. 4

Here are some further strategies that I see Brown/Green and Cattapan adopting in their work as responses to challenges confronting conflict art. 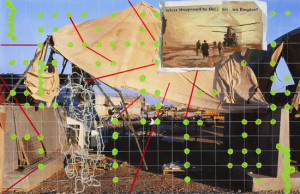 Through a glass, ghostly: Whatever is seen in the three artists’ work is generally seen through some intervening filter, apparatus or system. Nothing is ever just shown, everything is shown as mediated. The flat, even light of the digital camera is ubiquitous, complemented by the ghostly green of night vision goggles and other scopic mechanisms (radar) and systems (news imagery, topographic maps).

Can’t see for looking: The master shot is never delivered; the encompassing view is always denied. Screens, fences, blast walls, tents and makeshift sunshades disrupt large sections of the paintings, blocking out the long view and insisting on the contained, limited capacity of the artists’ gazes. Painted versions of screen data, topographic overlays and vectoral charts drape an informatic haze over photographic source materials. The world is rendered (in the imaging software sense of the word) rather than seen. Like a soldier’s combat wear, the canvases are smothered in disruptive pattern material (itself now digitally generated). And when all else is said and done, opaque veils of paint drip down the surface; not so much a metaphor for blindness as a declaration that image-making is both an act of occlusion and revelation.

Far horizons: Any passage into deep space tends to be structured as an incoherent foreground, followed by a leap over a radically-compressed middle ground, ending at an impenetrable mountain range. These are merely the component parts of kind of picture we might call a vista. And they serve, again, to declare that the comprehensive (comprehending) view is not on offer. The many gestures made towards mapping—grids, contours, threading trails—are all unanchored and delivered without a key. A map without a legend is just lines on a canvas, a figure of unknowing. 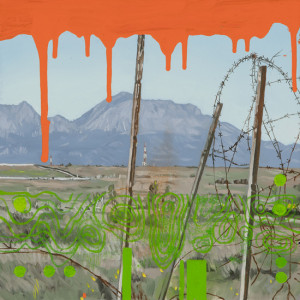 Picture building: Throughout, there are small gestures that speak of a desire to anchor down the structure of the paintings; to ‘true and fair’ the canvas as formalists used to say. Tent poles, stakes and other uprights reach to connect disparate elements into some kind of scaffold. Dots are placed in corners, as if to pin the image down. Grids and hovering rectangles grasp after the stability of ‘deductive structure’; if a logic for mark-making can be discovered in the material presence of the canvas perhaps there’s hope for one in the field. But what this does is make the painting’s surrogate nature all the more evident. The only world it can be sure of is its own; other worlds will be witnessed only in the aftermath of the painting.

The third hand: Collaboration brings with it factors that guarantee a ‘failure of clear meaning’. 5 Three different artists using different materials, working at different paces in different locations makes for an art that can never claim to be cogent. There will be no integrated voice, no resolved narrative, no assured witnessing. Instead, all the works will be essays in perspectivism, testimonies to the Nietzschean claim that the world is knowable only to the sense that it is interpretable. And in the contested field of conflict art, that is the place at which knowledge might begin the be developed.