Not long ago I found myself standing in a country pub staring at a print of that often-reproduced nineteenth-century engraving of three Australian farm hands carousing in a bar. Backs arched, arms flailing; they were the original wild colonial boys, out on a spree. Arjona’s rock’n’roll rednecks are their great-great-grandchildren, bingeing on Maccas and VB, throwing their arms around each other on cue when the Hunnas are cranked up late on a Saturday night. 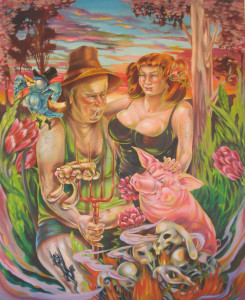 In seven large paintings, Grant Wood meets George Grosz; the prim totemism of the iconic American gothic mutates into bulging, pustule-encrusted hayseeds. Australia has always had its own version of the gothic, from Marcus Clarke through Albert Tucker and on into Wake in fright and Wolf creek. Arjona has discovered something of it in her relocation from Melbourne’s inner west to North Central Victoria. Nice folks … friendly, unpretentious. Things just get a little out of hand when the Barnsey CDs are dusted off half-way through the slab.

In keeping with Arjona’s rock’n’roll idiom, this is rural Australia as Ed ‘Big Daddy’ Roth would depict it—a psychedelic tangle of bloated heads and roiling flesh, caricatured figures who seem to take pride in their grotesquerie. The lyrical centerpiece of the exhibition—Nude sheila (2012); a young woman chugging a stubby astride a motorbike—had been sold when I visited. I’m hoping Young and Jacksons hotel have bought it to hang alongside Jules Joseph Lefebvre’s Chloe.