This essay was written for the catalogue brochure of Stephen Bush’s 1994 exhibition ‘The lure of Paris’. The exhibition presented multiple versions of the same motif—three Babar elephants climbing a modest cliff by the sea. Bush’s plan was to paint of version of the work once a year, from memory, indefinitely. He’s still at it; my illustration is last year’s version. I’ve done some house-cleaning in the essay—shorter sentences, shorter paragraphs—to address habits I’ve been trying to kick for years. The spirit of it is something I’m starting to see as a pattern; embracing the contemporary without forgetting that it, too, is historical. 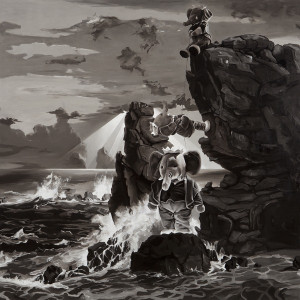 In the 1980s, two critical orthodoxies dominated discussions of originality in the visual arts. First, the modernist proposition that originality was attainable in the form of individual creative acts. And second, the postmodern claim that such originality had fallen victim of the death of the author and the chimerical novelties of the mass media. Both overstated the case (as orthodoxies tend to do), propelled by the art-world tendency to reduce debate to crude polarisation—the humanists versus the poststructuralists.

Stephen Bush questions the fundamental assumption—the presumed equivalence of creativity and originality—underlying both extremes. His paintings are doubly derivative; they emulate the conventions of the nineteenth-century landscape, and they repeat the artist’s own oeuvre. Bush’s serial treatment of a single motif proposes a particular, circular version of originality which, in separating creativity and originality, points to a complex understanding of the term that has been lost in modernist and postmodernist polemic. He suggests that while originality has been a privileged term in the visual arts, it has never been a consistent or stable one in either its life or recent ‘death’. The copy and the original meet in a paradoxical union. There is no perfect copy, it must have some originality; there is no perfect original, it must be derivative of the history of painting. The copy, then, allows the artist to speak of the way that a tenuous, relative originality is eked out of procedures of the most minute differentiation.

For several years, Stephen Bush has dwelt in the nineteenth century, exploring the ideologies of academic painting. He has learned the languages of landscape and narrative painting but, with a late-twentieth century suspicion of the rhetorics of history, he speaks them with an ironic accent that reflects on the persistence of their mythical elements in contemporary life; the dream of progress, the desire for the sublime, the (fading) grandeur of high culture.

His recent paintings retain this theatrical and sceptical tone but add a significant twist; if the early work seemed to repeat an academic formula, these paintings repeat themselves. Their seriality, however, is not a mechanical one; each is handmade, without any photographic or mechanical intervention. They are made independently of each other, literally in the absence of each other. They are not identical—they do not seek to duplicate either the original (the first in the series) or their immediate antecedent in the series—yet they are consistent.

Bush invokes a pre-modernist conception of originality from which the idea of creativity has been separated. Here originality lies not in the ability to produce a wholly unique and novel image, but in the ability to generate a consistent, individual practice out of received convention. Convention is signified by memory. The familiarity of the images points to the artist’s (and the viewer’s) knowledge of the weight of received history (the barrier to originality) but the motif itself is painted from memory, as if the artist is attempting to distinguish his own conception of a painting from all the remembered conceptions and conventions.

Repeatedly painting from memory points not to a dearth of originality but to its locus—the very conception of the image, the idea that incorporates, yet differentiates from, convention. The conception of the painting is an ideal moment of origin, the repeated effort to actualise the conception is the procedure that declares the artist’s attempt at originality while acknowledging that painting is always a form of copying (of conventions, of motifs, of techniques).

But this apparent corruption of the moment of originality is only a problem within the rhetorics of modernism (seeking absolute originality) and postmodernism (seeking the absolute copy). Within the nineteenth-century reading, the original can be the copy and vice-versa; the difference is relative rather than absolute. Originality is born out of an ideal conception and an imperfect practice; if the first in the series is derivative of an historical convention, the artist’s ability to repeatedly reproduce the moment of conception is a sign that he has, in turn, generated his own convention. Repetition doesn’t mark the end of difference, repetition is the origin of difference.

To return to the polemics of the 1980s, I think it would be wrong to see Bush’s work as simply retrieving or denying originality. His historical citations are not a nostalgia for the stabilities of the nineteenth century; he is not trying to salvage authorship and originality in the face of their current vicissitudes, indeed he implies that the concepts were always problematic. Nor is his series intended as a kind of postmodernist parody of originality, a game of Chinese whispers whose repetition dissolves the original into incoherent nonsense. What is important is that Bush evokes the nineteenth century in order to point to the relativity of originality in that century. The debate of modernist versus postmodern, of absolute original and absolute copy, is itself relativised and rendered historically specific. The lesson of Bush’s work (for all good academic paintings have a moral) is that originality cannot be registered in such crude terms; it is the product of a complex equation incorporating history, convention, difference and repetition.

In arguing that the nineteenth-century artist was ‘relaxed’ about copying, and that originality was only a ‘problem’ for the late-modernist artist, I was drawing on a sequence of important essays by Richard Shiff (University of Texas, Austin), which positioned originality almost as an historical anomaly rather than a norm. All worth pursuing.