Can an art work be an oxymoron? A profound Jeff Koons, there’s one. A scintillating Bill Viola, there’s another. But those are oxymorons of the non-technical, colloquial kind; the snide put-down, the cheap shot. What about a more formally constructed oxymoron, one that uses a jolting contradiction for rhetorical effect?

Noel McKenna’s current exhibition is riddled with oxymorons. Many of his paintings are funny, but they’re not one-liners. They’re stealthy oxymorons. Like Thomas Pynchon’s ‘fluorescent beige’ they point to a world that can be momentarily imagined before good sense tells you it can’t be so. 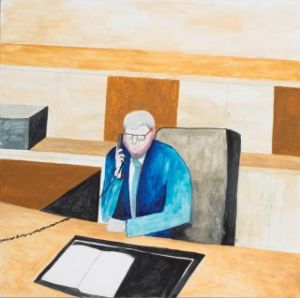 Prime Minister Kevin Rudd having a chat with President Obama (2014) oozes banality; an impassive figure hunched among generic CEO furnishings, against a background of bureaucratic brown. But there’s your contradiction. You don’t simply have a chat with the leader of the free world, do you? Look what happened to Gwyneth Paltrow when she introduced President Obama at a fund-raiser last week: ‘You’re so handsome that I can’t speak properly’, she gushed. 1 McKenna is wise to the politician’s game here. Obama on the phone? No biggie. Sure I’ll have a chat. Got the shot? In Rudd’s folksy hall of mirrors, the arch-politician plays the anti-politician and the rest of us of are sucked into the vortex of so-called retail politics; he knows that we know that he knows that we know … infinity! 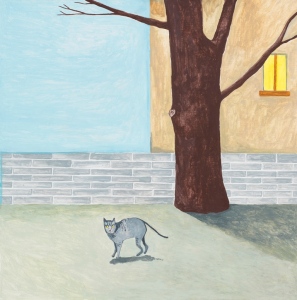 In McKenna’s paintings, everyday suburban life is riddled with contradictions. Look at all those cats and dogs he spots in lounge rooms and back yards. Those supposedly domesticated animals stare out at us as if we’ve encroached on their territory rather than vice-versa. McKenna wonders what they’re thinking. But what about what they’re making us think, after infecting us with various mind-altering parasites. 2

In any case, the everyday is inherently oxymoronic. As Maurice Blanchot pointed out, as soon as you make the everyday your subject, it ceases to be quotidian. Instead, it becomes a privileged fragment; the stuff of art, literature and sociology rather than the banal background noise of existence. That’s why McKenna’s paintings often have such an odd tone. When the infinite field of the ordinary is punctured by the momentary spark of incident—a prowling cat or a startled pet—the painterly oxymorons flow. Fractured unity, hieroglyphic snapshots and foreboding domesticity are among the foundations of McKenna’s peculiar signature.

McKenna’s world often looks as if it had been assembled from the miniature trees, buildings and people used by model railways hobbyists. But it has a far more distinguished pedigree. His wan light and parched pigment pay homage to Giorgio Morandi, whose landscapes have long been overshadowed by the better-known still lifes. Above all, McKenna is an antipodean heir to L S Lowry. Neither is a naïve artist, for all the hieratic starkness and apparently folksy observation. Both make what used to be called ‘plain paintings’; unembellished, deceptively obvious pictures underpinned by an acute awareness of the complexities of social spaces. 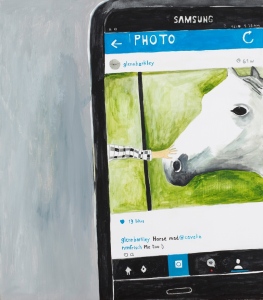 I get the sense that McKenna’s worries about the prospects of plain painting in a digital age. Instagram (2014) is a painting of a transmitted digital photograph; more a tautology than an oxymoron. A relatively new version of picturing (only four years old this month), Instagram is merely the most recent manifestation of art’s decrepitude. Morandi worshipped at the ‘altar of silence’. 3 Today’s artists and curators have signed onto the chatterverse. When I first saw Noel McKenna’s work (maybe twenty-five years ago, at Niagara Galleries), there were horses. They’re still here, but at several removes; a painted fragment of a screen shot of hurried smart phone picture … a picture that asks you to like, not look.