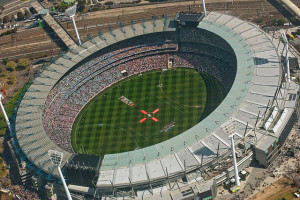 Among the most popular ritual chants in football’s liturgy is a stoic declaration of faith that goes along the lines of, ‘It’s been [insert number of decades] since I’ve seen [insert team name] win a flag’. The idea is to demonstrate unswerving faith in the face of myriad disappointments; to think like Job, talk like Yoda. Not only does this establish your credentials as a fan, it also declares that this year you deserve a win.

The problem is that both camps in my household—me on the Collingwood side, and my wife and daughter on the Saints’—figure it’s their turn. Both teams have fought hard to establish themselves as perennial top-four sides. Both have come tantalisingly close to a flag. Both can point to unlucky breaks, untimely injuries and inexplicable umpiring decisions that have cruelled their chances.

The impending storm had been hanging over my household since the preliminary finals. Armed with Collingwood jokes, and the claim that history was on their side, the girls had been chipping away at me. I missed out on a ticket but buying theirs was an investment in domestic harmony. Win or lose, the safest thing to do was to put some distance between us.

And now this. It’s funny how long-suffering fans assume that football owes you something. Because football is an Old Testament religion. It doesn’t love, it tests. A premiership is a distant paradise on the far side of a wilderness in which many of us wander all of our lives. Yesterday, like Moses, Collingwood let their impatience cost them entry into the land of milk and honey. Assuming that a first quarter blitzkrieg would do for the Saints what it had done for Geelong the week before, the Pies lost focus when the match turned into drawn out trench warfare.

For me, the logistical challenges posed for the AFL by a drawn Grand Final pale into insignificance beside the prospect of another week nodding politely at any mention of St Kilda’s Lenny and Dal, or feigning interest in elaborate numerological omens forecasting a Saints win. Another week agreeing that, yes, Collingwood fans can be a little impolite; and that, yes, they really should pay more attention to what that nice Riewoldt boy is saying.

The pundits always invoke T S Eliot when speaking of a draw; not with a bang but a whimper . . . But neither? By this time next week, I’ll be grateful for any result.