This piece was written for the exhibition brochure. As always, Hickey’s work prompted me to reflect on how complicated supposedly simple paintings can be. 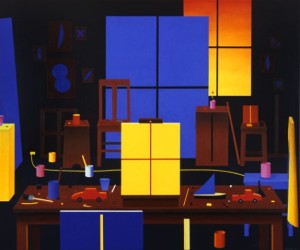 When paintings have a singular target, the writer’s task seems straightforward enough. Because Dale Hickey’s new paintings circle around the motif of the artist’s studio, they teasingly invite the writer to declare a specific trajectory and give the artist’s destination a name. It quickly becomes clear, however, that the paintings head off in several directions at once; it’s more a case of charting their itinerary than anchoring them in one place.

The journey begins and ends in the studio but along the way the paintings traverse painting’s genres, from still life to non-objective abstraction, and art criticism’s canons, from modernism to postmodernism. At the same time the viewer is taken, simultaneously, through a succession of formal, spatial and optical registers. The paintings are not perverse mutations or casual hybrids but tightly orchestrated exercises that invite the viewer to weave a subtle course through familiar but seemingly incompatible territories.

There’s an almost ceremonial sense of entry into these paintings. They open onto a contrived space; what used to be called the ‘Albertian window’, in homage to perspectival constructions of the Renaissance. It’s easy to step into their shallow, stage-like fields; almost a reflex action. These paintings welcome you in, but leave you hanging. The point of view granted the visitor is an eerily high one; you hover over the floor, in the space of the painting but not exactly part of it. You wait for some action to commence but none eventuates; each scene is an unending pregnant pause, reminiscent of the ornate formality of Dutch still life.

Flat colour and stark line soon close off this space, returning the viewer to the blunt, unmodulated surface of the canvas. Modernism, in its heyday, used to invoke this surface as evidence of the ineluctable, the incontestable, flatness of a painting. These paintings pair rounded form—tumblers painted as if turned on a lathe—and colour fields—bluntly geometric canvases propped within the larger space of the paintings. Without making any grand declaration, they register Hickey’s lack of concern for the rigid determination of the boundaries between genre, style or critical theory. There are modernist gestures; the prominent display of the tools of the trade, the flaring optical resonances of colour. And there are postmodernist ones; the almost schematic combination of art historical moments within little models of the studio.

After viewing the paintings, I found myself thinking of the work of the American surrealist Joseph Cornell, who constructed small boxes filled with strange collections of photographs, illustrations and found objects. Hickey is no antipodean Cornell; he is neither a surrealist not an eccentric recluse. What triggered the connection was the overwhelming sensation that his paintings were enlarged memory boxes containing, like Cornell’s, images, objects and recollections. It’s the poetic association of all of these in Hickey’s paintings that overcomes the imperatives of stylistic affiliation and critical categorisation. Realism and abstraction, illusion and materiality, form and geometry cease to be antitheses; they find common ground in Hickey’s cumulative experience of his work. The paintings have the everyday character of a diary and the encompassing sweep of autobiography. The journey they trace is of a life in art.

Additional works from the exhibition can be viewed at John Buckley Gallery.