The jockey and his wife (1953) predates Brack’s sustained exploration of the comédie humain of the Australian racecourse in 1956. That series—encompassing watercolours, drawings and prints—studiously plotted the procedures of horse racing and the patterns of crowd behaviour. Each year, Melbourne’s famed Spring racing carnival brought a determined gaiety to the city: Brack responded with a thin fog of sepia-toned melancholy.

This earlier painting is less concerned with the substance and spectacle of the sport of kings. It has more in common, both stylistically and thematically, with a cluster of works from the early 1950s attending to the masculine and the feminine, and their embodiment within public and private spaces. In Brack’s October 1953 exhibition at the Peter Bray Gallery, The jockey and his wife was presented alongside two teenage sweethearts (The tram), a young married couple (The new house), fashion-conscious women and men (The veil, Three women, Men’s wear) and generic Aussie blokes (Man in pub, Three of the players).

In these and other works made between 1952–55, Brack’s preoccupation was with social identity as it was articulated in costume, status and demeanour. Real men and women are contrasted with their idealised mannequin equivalents in shop windows. The canvases are populated by shop assistants, barbers, managers, footballers, husbands, wives and daughters. Many of them appear intent on their public self-presentation; the hat positioned just so, the tie knotted sharply, the cigarette lit with the studied aplomb of a movie idol. Some appear nervously uncertain of their lines, while others stumble slightly; Brack’s dining Manager gauchely spoons peas into his mouth with a fork.

Within that 1953 exhibition, The jockey and his wife might have read as a companion to The new house. The latter reeks of restraint and thrift; a be-suited clerk and his aproned wife are anchored in an austere suburban lounge room. The former has a whiff of Damon Runyon; snappily-dressed men, brash women and the likelihood of an encounter (to use one of the great Australian euphemisms) with a colourful racing identity.

Significantly, in the later racecourse series, all of the jockeys are on the job; they wear their masters’ silks, take direction from trainers, muster in the mounting yard and weigh in under the watchful eyes of the stewards. Here the jockey wears civilian clothes; a sharp suit and natty bow tie that might have been sold to him by the rather shop-worn sales assistant of Men’s wear. This is the jockey not as indentured servant but as man-about-town. He is less an emblem of the part-aristocratic, part-feudal culture of the racecourse and more a register of manhood in a city of modernity, new money and consumerism. 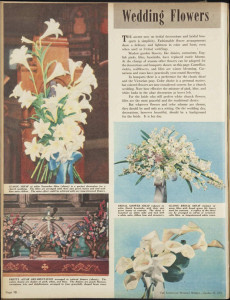 The jockey’s wife, like so many who populate Brack’s paintings of the 1950s, seems to strive mightily to meet the standards of fashion and decorum, with only mixed success. Then, as now, the fashions of the field were a focus of Melbourne’s Spring racing carnival. In 1953, if the Argus and Women’s Weekly are any measure, hats of a more simple and restrained geometry were preferred. Dresses were less boxy in structure, emulating Dior’s new ‘soft look’. And flowers, if worn at all, were considerably more restrained. As the ‘Women’s Parade’ column of the Argus (5 November 1953)warned, ‘At their best, accessories are an expression of good taste, at their worst they can devastate the overall picture.’ Here, the November lilies (Lilium longiflorum) seem ostentatious in scale and number. Worse, they are out of place; the Women’s Weekly (28th October 1953) recommended them as decorations for a church wedding.

But let us adopt a more forgiving frame of mind. If neither the jockey nor his wife are dressed appropriately for the racecourse, and the lilies belong in a nuptial bouquet, why not assume that Brack depicts their wedding? Not merely the jockey and his wife, then, but the jockey and his new wife. So this painting connects with other works of the early 1950s in identifying ‘newness’ as a distinctive and, I think, ambivalent quality of post-war Australian life. Paintings such as The new house and New suburb discover the Australian dream in suburban expansion, while in paintings of shops we are offered new clothes, new kitchenware and later, new limbs. Coupled with Brack’s deliberate archaism—a quaint barber’s shop, out-dated domestic furnishings and cars—this evocation of the new becomes another of the many dyads underpinning his oeuvre—male/female, new/old, young/aged, humble/elevated—eventually to be distilled, in the ‘pencil’ series of the 1980s, into the all-purpose here/there, pro/con, and us/them.

There is one element of The jockey and his wife that carries over emphatically into the later racecourse series; the clock hovering prominently above the jockey’s brilliantined hair. The 1956 works are littered with clocks, offering a staccato narration of a day at the races across The tree (2 p.m.), The stipendiary stewards (3.02 p.m.), Horses leaving enclosure (3.05 p.m.) and Steeplechase (4.10 p.m.). Time lies at the heart of horse racing, whether for trainers clocking their horses’s performances or punters diligently pursuing a crowded card in the betting ring. That Brack’s most famous painting, Collins St, 5 p.m. declared the time in its title suggests that the artist saw a hallmark of modern experience in the temporal discipline that shaped the life of the jockey, commuter and the drinker alike.

And in other ways, too, The jockey and his wife encapsulates Brack’s recurrent interests. The conventional husbands and wives of the early 1950s would progress into the elaborate couples of the ‘Wedding’ and ‘Ballroom dancing’ series of the 1960s and culminate hieratically in the Kings and Queens of the ‘table top’ paintings of the 1980s. The formal domestic unit—husbands and wives, parents and children—is revisited throughout the 1950s. And underpinning all of this, is Brack’s lifelong preoccupation with men and women as articulations of a type, as units within a social schema rather than beings in their own right.