Since the time of writing (1997), Richardson has reduced the number of projected volumes from five to four. And who can blame him? The third appeared in 2007 and the final volume will be published later this year.

In the 1970s, one of rock’s great eccentrics, Jonathan Richman, tried his hand at art history, singing; ‘He was only five foot three but girls could not resist his stare/Pablo Picasso was never called an asshole’.

Richman described perfectly the standard form of the Picasso biography; tell the story of the man through his women, admit his faults, never challenge his genius. Although John Richardson occasionally dwells on Picasso’s foibles (fussy diet, a distrust of paper money), there is no question of him calling Picasso an asshole. Richardson would mention the artist’s fundamental orifice only to declare that the sun shone out of it.

If Richardson’s biography follows a familiar route, it still promises to be the best. I say promises to be because, at two volumes into a five volume project, the difficult test lies before him. In the current volume, Richardson revels in what are commonly accepted as Picasso’s wonder years. With the invention of cubism now dealt with, later volumes may seem anti climactic.

But there is no shortage of climaxes in this book. Inevitably a personality driven affair, it opens like a real bodice ripper. (Or would that be ‘smock-ripper’, in deference to its artistic subject?) Words and phrases like ‘savagery’, ‘tormented’, ‘overheated feeling’, ‘animalistic’, ‘drugs’, ‘rough trade’, ‘sexual experimentation’, ‘psychopath’ litter the first two pages alone. On the other side of the ledger, ‘saintly’ and ‘phlegmatic’ are defeated by sheer weight of numbers. But who could blame Richardson; after all, he writes of Paris at the very height of its bohemianism, at one of those rare moments when the myth really did match reality. 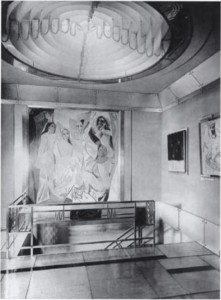 After that opening flourish, Richardson settles down to building the biography of record. Names, dates, even addresses are all given; with sufficient data to stock a lifetime of Picasso trivia nights. Richardson wastes little time calling attention to others’ errors, confidently presenting his version as the definitive one, pulling the myriad threads of Picasso legend into one authoritative work. Following convention, the narrative documents a series of sexual and artistic campaigns, as mistresses and paintings alike are enumerated. If the approach is predictable, few would complain, for at the level of raw information, Richardson’s is a foundation text. If existing art history texts tell us as much about the art, no other book tells us as much about the artist.

His determination to write the definitive text presents Richardson with problems. Many are generated by Picasso himself, others stem from Richardson’s peculiar ambivalence towards art history. Richardson takes Picasso’s genius for granted, but is curiously defensive of it. He is dismissive of any artist, critic or art historian who might steal even the smallest part of Picasso’s limelight.

Occasionally this gets out of hand. It’s tempting to agree with Richardson that Gertrude Stein made a career of getting cubism wrong, but why the repeated bastardisation of Derain and others as weak-willed, parasitic wannabes? At times Richardson has to admit that cubism wasn’t a one-man show but the supporting cast isn’t allowed to take centre stage. The solution, which produces peremptory and unsatisfying writing, is to intersperse the narrative with chapters offering a hurried roll call of collectors, dealers, and sundry hangers on.

While many of his insights into Picasso’s art draw on the work of respected scholars, Richardson sees art history as somehow elbowing the artist aside. For Richardson, Picasso’s greatness in his sheer inventiveness and evasiveness; his ‘work is far too protean and paradoxical to be limited to a single reading’. But he seems almost resentful of anyone, other than Picasso himself, who might propose a reading. Much ink has spilled, for example, on the issue of Picasso’s political allegiances, especially the possibility of his sympathy for Spanish anarchists. On this, Richardson is at his most forthright; ‘No, the only issue of passionate interest to Picasso was cubism’. Yet later, Richardson notes Picasso’s expression of pacifist beliefs in his art. Multiple meanings are permissible, it seems, only if they come from the one source; Picasso himself.

Commonsense might suggest that this is a reasonable approach, but Richardson also makes great stake of both the density of Picasso’s work and the artist’s secretiveness about his sources and meanings, suggesting any argument based solely on the artist’s authority would be limited indeed. This is the paradox that nags at Richardson; Picasso’s greatness rests on his art inviting endless interpretation, but interpretation transfers authority away from the artist and into the hands of the dreaded art historians.  Part of the problem lies with Picasso himself, as Richardson reluctantly admits.  If Picasso was an artist convinced of his ‘messianic power’, he was also a ‘master at deluding himself’. So which of the two Picassos is the right one? And how does one write the definitive story of such a contradictory character? Simple questions, but Richardson will need all of his five volumes to answer them.