A written (and therefore polished after the fact) version of a speech I made at the opening of ‘Reinventing the wheel’, an exhibition at the Monash University Museum of Art, exploring the legacy of Duchamp’s readymade.

Reproduction, repetition, saying the already said … these are the hallmarks of contemporary experience.

The capacity to tolerate this experience rests on one’s ability to embrace a life lived within quotation marks.

It’s an awkward embrace. As Susan Sontag remarked, in a diary entry from the 1960s: ‘So much in modern life that can be enjoyed, once one gets over the nausea of the replicate.’ 1 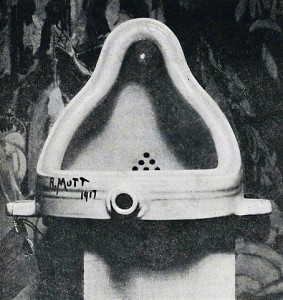 Marcel Duchamp never succumbed to that nausea. His inauguration of the readymade in 1913 was a singular and lasting inoculation against it.

He defied that nausea in choosing a readymade name—the readymade—to name his gesture. It was an English word; a Frenchman’s use of it made the borrowing very apparent. It had existed since the sixteenth century, so Duchamp’s gesture was not merely to do with industrial modernity. And it meant, in 1913, what it had meant in the 1500s (that is, the opposite of made to measure). What it means now, after Duchamp, is a different story, the story of this exhibition.

A legacy arises when an artist issues an inescapable challenge to those who follow. As Alan Kaprow remarked in 1958, when he assessed Jackson Pollock’s legacy, all subsequent artists must begin by asking ‘What do we do now?’2

The irony is that a legacy itself can engender the nausea of the replicate. As Bruce Nauman (someone who you’d think wouldn’t have to worry) asked: ‘What can you do, there’s a Pollock painting and all you can do is make an imitation of a Pollock’.3

Any readymade we encounter today is a kind of imitation. And Duchamp’s own readymades are themselves replicates, post-facto facsimiles. So is it a matter of repeating Duchamp’s various gestures? His nominalism, his silence, his subterfuge, his sloth, his passive aggression? Or of carefully marking boundaries between the readymade and the found object? Or of adding the ‘derived’ (or perhaps dérived) readymade to existing taxonomy of the plain, the assisted, the sad, the sick, the reciprocal and the semi- readymade?

Post-Duchampian iterations of the readymade have a specific historical form. In 1976, Richard Dawkins coined the word ‘meme’ to account for the circulation of ideas formed in what he called the ‘soup of human culture.’ The meme, Dawkins’s said, is a ‘new replicator.’ It acts as a ‘unit of cultural transmission, or a unit of imitation.’4Always-already replicated, the readymade is such a meme. Duchamp worked in the soup of human culture and so too do those who follow. The gesture of the readymade—not the art work as such but the possibility of making art in that way—is a unit of cultural transmission, melding commodity fetishism, exchange value, symbolic value, institutions, and status in and of the everyday.

What saves subsequent gestures from being mere citations or homage is the manifold ambiguity of the readymade. The readymade is anchored on the paradigmatic axis of language, permanently buffering all of its possibilities, rather than nominating one of them and forging ahead on the syntagmatic axis towards semantic transparency.

Replicating the readymade speaks of what Marshall McLuhan called the ‘all-at-onceness’ of our experience.5 Dumb objects speak endlessly of the plenitude of meaning. Joseph Beuys was wrong when he said that the silence of Marcel Duchamp is over-rated. There was never any silence, or rather, the silence of the readymade is deafening.

There can never be—there never was—a banal readymade. All are subject to the peculiar alchemy that Maurice Blanchot identified when he reflected on the paradox of the everyday. As soon as a fragment of quotidian experience is singled out for inspection, it becomes distinctive. The readymade will always turn lead into gold, whether you mean it to or not.6

This is the determinate arbitrariness of the readymade. This is how its emptiness is always plenitude.

In his novel, Tender is the night, F Scott Fitzgerald has his protagonist, Dick Diver, say this: ‘The strongest guard is placed on the gateway to nothing … Maybe because the condition of emptiness is too shameful to be divulged’.

Duchamp is that guard on the gateway to nothing. He admits only those artists who are unashamed of emptiness … unashamed because they know it can’t exist.

The artists in this exhibition have met the guard at the gateway to nothing. They have made their way through because that they are not asking ‘What do I do now?’ or ‘How do I make a new readymade’ but ‘What do I have to do to be an artist?’ They are comfortable on the other side because they never see emptiness.

Disturbing the edges of what we call art: Tim Johnson and punk, 2009
Sight/non-sight: Robert Smithson and photography, 1997