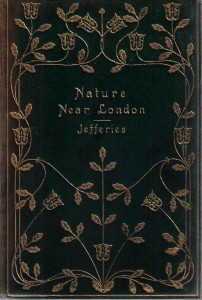 I don’t recall precisely when or why I began reading Richard Jefferies’s essays. I do know that at the time I was in the habit of borrowing from the research collection of the University of Melbourne’s Baillieu library. That was where redundant, superseded and foreign language volumes were stacked. The shelves were lined with uniform editions of once-popular authors, many of them dating back to the university’s earliest days and unborrowed for many years. With a flu coming on and the foreknowledge that I’d have to spend the next day in bed, I left the library with a fistful of thin volumes of Jefferies observations on nature, rural and city life in nineteenth century England.

Jefferies (1848–1887) was one of the great nature writers of his era, publishing his observations of flora and fauna, waning rural traditions and the new urban environment in journals such as the Pall Mall Gazette and Cornhill Magazine. His essays combined an almost diaristic observation of the seasons with pantheistic reflections on nature. The latter culminated in his ecstatic account of his ‘soul-life’ in The story of my heart (1883).

Of course, I was immediately attracted to Jefferies’s qualities as an observer, especially in essays exploring the meeting of nature and nineteenth century modernity. Here was a nature writer who noticed that birds of prey were now perching on telegraph wires next to open fields, or that grass grew differently around footpaths.

But I was quickly struck by the remarkable economy in his writing (especially given that nature writing so often lends itself to endless description and wordy reverie).

Here’s a selection of opening lines from some of Jefferies’s essays:

A fig tree is not a flower, and yet it is associated in my mind with primroses.

Most people who go on the West Pier at Brighton walk at once straight to the farthest part.

Tiles and tile roofs have a curious way of tumbling to pieces in an irregular and eye-pleasing manner.

There is a slight but perceptible colour in the atmosphere of summer.

Each is a forthright announcement that leaves me urgently wanting to know why the author would declare such a thing. All the more effective since I have no intrinsic interest in any of his topics.

And here’s a paragraph, in its entirety, from ‘Nature near Brighton’:

One day I saw a weasel cross a road in Hove, close to a terrace of houses.

If you must have evocations of nature’s moods, how about this (again, an opening sentence).

Coming like a white wall the rain reaches me, and in an instant everything is gone from sight that is more than ten yards distant.

This is one of those moments that puts the lie to any description of Jefferies as ‘just’ a nature writer. The sentence opens with a dramatic urgency that movies have since normalized. And then, in a kind of modernist negation, Jefferies announces, at the beginning of an observational essay, that his field of vision is radically restricted.

In 1883, Jefferies noted his principles of writing in a notebook:

I’d be happy to achieve any one of those; they all seem a long way off yet.