Opening night at the Palais theatre served up a tasting platter showcasing the house specialities of a short film festival. There was the fast-paced-short-with-a-punchline, shots cascading into each other like a row of falling dominoes (Chopper). The gleefully offensive animation with the redeeming ‘awwww’ ending (The video dating tape of Desmondo Ray, aged 33 & ¾). The as-seen-on-Rage-at-3 am music videos and the shorts that read like an episode from a grander dream project (Test drive). Eleanor Wilson’s Possum stayed with me on the long march toward the after party, primarily because of its distinctive visual density. 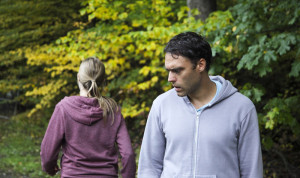 Low budget shorts can have a diluted, washed-out feel; art direction takes a back seat, locations are selected opportunistically, lighting lacks subtlety. The rhythm of a script can skew towards speed-dating; slow builds or carefully orchestrated shifts in pace are an unaffordable luxury. While I can’t say I liked Possum, Wilson gave every shot a sense of gravitas. An otherwise familiar ‘true love travels on gravel road’ narrative was tightly packed with material and sensate detail. Mood was condensed into the textures of a bourgeois interior (designer casual, carefully comfortable) and an upstate New York landscape (lush, but never picturesque).