This piece is an example of my habit of filing thoughts away until things start to click. I saw the ‘Fandom’ exhibition in New York in November 1997 and Mutlu Çerkez’s exhibition back in Melbourne. In mid-1998 I was back in New York, where I saw Elizabeth Peyton’s work at MoMA and Erik Hanson’s drawings at Pierogi 2000 in Williamsburg (and in his Lower East Side studio).  An email from Ashley Crawford at ‘World Art’, asking if I had anything to contribute to a theme issue on rock music prompted me to pull the threads together. 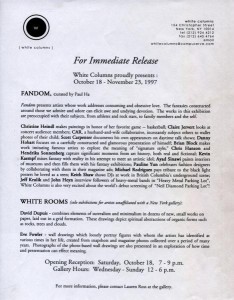 In all my years spent looking at art, I never thought it was something that might show me how to live my life. Lately that’s changed, and a certain kind of art has helped me through one of those little existential crises that seem to become more frequent with age. I recently came out as a rock fan. I always was one really; memories of my youth are inseparable from radio, music videos, albums and gigs. Now it’s different; I’ve become a Mojo-reading, box-set-buying, web-site-bookmarking, top-ten-list-making fan. I never set out to be a trainspotter but I’ve started preferring alternate takes to original releases, bootlegs to studio albums, and B-sides to A-sides.(I’m writing this to the remastered CD reissue of the first New York Dolls album, which isn’t as good as the Marty Thau produced demos for the same record.) Seeing artists struggling with the same dilemma has helped me make sense of my own position, because they map out the kinds of consumption that being a fan entails.

Elizabeth Peyton is the perfect fan, at least at the emotional level. A New Yorker smitten with the bad boys of Brit-pop, Peyton paints watercolor pinups of her idols. Using lush colors and languid poses, she transforms miscreant rockers into the languid and heavy-lidded non-threatening boys of teen magazines. Seeing her work, I can’t help thinking of Marcia Brady’s crush on Davey Jones of the Monkees; each brushstroke seems to cry out, ‘I’m a believer’.

Peyton is the absolutely empathetic fan, with an endless reservoir of sympathy for these devils. John Lydon and Liam Gallagher are rough diamonds, misunderstood and persecuted by the media, and only a fan like Peyton can see their sensitive side. The Brit pack becomes an enclave of effete bohemians and sensitive geniuses. I don’t mean that they’re emasculated; it’s more that Peyton persistently strips away the macho swagger of the rock star to find the soul of a vulnerable poet hidden behind it. Peyton does what a real fan should, she subsumes the star within her own fantasy, makes him hers, makes him perform for her on her terms. These paintings have their roots in the teenage doodle; lingering and only faintly lustful tributes of the kind furtively scribbled in the margins of schoolbooks, as classmates idly carve names of bands into desks. The lushness and repetition of the images makes them into fetishes; rich washes of watercolor casting a charm over the subjects, drawing them into spell of the fan’s desire. Peyton is the antithesis of the trainspotting fan, whose empiricism fetishizes facts over appearances. Set lists, out takes, B sides and matrix numbers don’t interest her; Peyton is the fan as fantasist, not fanatic.

Peyton may get no closer to the stars than their printed image but she makes them hers. Each brushstroke is a caress, each drop of watercolor another tear shed for Kurt. These fetish images amount to the ultimate articulation of fantasy, where the dream is better than the real thing, something that would be spoiled by actually contacting the star. Many of the fans’ anecdotes of meetings with their idols collected in John Aizlewood’s Love is the drug are written in disappointed, self-deprecating tones, as if the real never matches up to the imaginary. But Peyton avoids such let downs, her heroes are forever young.

In contrast to Peyton, Australian artist Mutlu Çerkez is the trainspotting fan, displacing his desire onto the minutiae of rock. Çerkez recently exhibited a series of proposed covers for Led Zeppelin bootleg albums. In appearance, these covers have the bald-faced, no frills aesthetic typical of the bootleg. It is in the text that Çerkez shows his hand. He adopts the completist’s strategy, listing the all-important variants of set order and lyrics so dear to aficionados of Led Zeppelin’s rambling, improvised jams.

Clinton Heylin’s history of bootlegging, Great white wonders, identifies Led Zeppelin as the most bootlegged of bands. He describes the completist’s wet dream, a 70-album boxed set of every Led Zeppelin bootleg available in the mid-1970s. The production of this set reads as an exercise in process art, with hapless bootleggers repeatedly circling record bins stacked with discs to collate it. In this there is a hint of the method to Çerkez’s mania. Littered throughout his project are parallels with the conceptual and systems art of the 1970s. The bootleg is, after all, a form of performance documentation. The completist’s obsession with cataloguing is similar to the bureaucratic impulse of conceptual art; both fan and artist become petty clerks.

I don’t mean that Çerkez doesn’t actually like Led Zeppelin but rather that he’s managed to make art out of something that melds art and the everyday, pleasure and criticality. His covers enact the desire of the fan but also use it to reflect on the status of his own practice. In this regard, Çerkez’s focus on bootlegs of Led Zeppelin’s 1973 tour of Australia is significant. The records chart two kinds of importation and consumption: one, the gig itself, was legal, distant and ephemeral; the other, the bootleg recording, is illegal, present and persistent. Presence and absence, legitimate and illegitimate importation, are figures haunting Australian culture. Re-enacting the cargo cult surrounding the importation and consumption of a band, Çerkez alludes to Australia’s status as a provincial culture forging practices out of its consumption of imported global culture. And on a trainspotting note, the tour itself demonstrated something of this ambivalence. While fans eagerly anticipated Led Zeppelin’s visit, and responded fervently to the gigs, they resented its appropriation by commercial sponsors, booing them at the Sydney venue. As rock struggled with the collapse of street credibility under the weight of corporate rock, so Çerkez’s bootlegs mirror the ongoing debate on authentic and inauthentic culture in Australia.

Erik Hanson, too, makes work based on a close, almost obsessive attention to recorded music. Where Çerkez focuses on the package, Hanson dwells on the moment of consumption. His drawings and photographs are a series of attempt to make a picture or diagram of the experience of listening to music. In drawings such as David live or the series Favorite punk songs, Hanson traces a spiral for the duration of each song. These lines mark the time spent listening to a track. Each spiral is a record of a record, a portrait of the disk, a registration of the attention given to the song. There is no attempt chart the pulse of the music, or the passions of the listener. The drawings mimic the groove of a record; the sharpened pencil is the needle, the page becomes a custom pressing. Hanson’s process registers the moments when he is lost in music, a drifting state of meditation and pleasure. He shows desire dissolved into practice; passion is not sublimated but recognized as a kind of thought.

Returning constantly to favorite albums, including their reissued variants, Hanson is the kind of fan whose tastes seem to amount to autobiography. Looking at someone’s record collection can be a little like reading their diary. There are hints the pathos of fandom, captured so well by Nick Hornby in his novel High fidelity; naming favorites subjects music to the banal rhythm of the laundry list, and passion is surrendered to the warm inner glow of nostalgia. But Hanson is careful to avoid that trap. Key albums in his work are not one’s he owned in his youth; David live is a recent purchase. And Bowie is not a singer who can be given the romantic treatment that Peyton accords Cocker, Beck or Cobain. For Hanson, Bowie’s significance lies in his inauthenticity, his rejection of the existential heroics of rock in favour of the staged personas of pantomime rock. There are no saints or saviors in Hanson’s Top 40; from Thin White Duke to urbane art collector, Bowie’s many guises are an object lesson in the intense, but fleeting quality of identity.

Hanson doesn’t want a lot out of Bowie, in fact, the less there is to Bowie as a person (as opposed to a persona) the better. But for other fans, making contact is everything. Kevin Kaempf’s installation in the White Columns exhibition Fandom presented the fan as potential stalker. Kaempf’s idol was an artist, not a rock star; the installation revolved around his efforts to make contact with Bruce Nauman at his New Mexico ranch. Fantasy and rude reality met in the piece. Kaempf displayed a blunt rejection of his request for a meeting, written to him by Nauman’s assistant. Superimposed on it was his dream reply; one in which Nauman welcomed him as an equal and potential heir. This poignant mapping of the aspirations of a young artist took on sinister overtones with Kaempf’s construction of a scale model of the Nauman compound. Would Kaempf arrive uninvited, or lurk at the gates waiting for ‘Big Bruce’ (as the locals call him) to emerge? There were signs that admiration would escalate into mania. Kaempf obsessively signed his name on a huge scroll of paper, weighing up his multiple signatures against a blown up version of the one on his rejection letter. Reminiscent of the petitions fans send their idols, these signatures hinted at an Oedipal struggle, the would-be heir killing the father by overwriting him.

Kaempf is the kind of fan who might love his idol to death, but in Starlust, one of the few sustained studies of fan culture, Fred and Judy Vermorel argue that fans usually have a very healthy relationship with their fantasies. They revel in them, allow them to guide their lives, yet can step back to see their structures and absurdities at the same time. This is what artists learn from the fan; that art can be about desire and distance, the sublime and the ridiculous simultaneously. What I’ve learned from artists is the kind of fan I want to be; Hanson taught me that I can have a fan’s attentiveness without the crippling obsessiveness; Çerkez showed me how to take fandom beyond consumption to production; Peyton showed me the pitfalls of fantasy untempered by irony; Kaempf, did the opposite, using his own fandom becoming a reality check against the art world star system. All useful lessons, but right now I need to compare the mono and the two stereo mixes of ‘Pet Sounds’, then compare the vinyl to the CD …