This essay was written to accompany a suite of photographs of Jon Cattapan in his studio. At the time I was occasionally interviewing artists in their studios for the ABC TV program ‘Sunday arts’. So I had a bee in my bonnet about the impact of post-production effects (especially music) on the meaning of the conversations.

One of my pet peeves is the convention in television documentaries that demands that all footage of artists at work in studios be overdubbed with either out-there experimental jazz or light Baroque (preferably Vivaldi). The former, I suppose, is meant to suggest that the creative process is disjointed and discordant, as if an artist’s neurons only fire in a, you know, avant-garde kind of way. The latter—the Apollonian model, I guess—implies that the creative process is lyrical, classical and altogether piss-elegant.

Either way, the implication is that artists work to the beat of a different drum. The studio appears other-worldly because it’s propelled by rhythms alien to those of mere mortals or because it’s imbued with a refinement of spirit vastly superior to the everyday world. There are occasional variants. I remember once that the Playschool team looked through the round window to watch an action painter at work; the flinging and splashing left the host lost for words, and Big Ted and Jemima cowering in a corner.

The televisual studio swings between padded cell and Olympian slope. Having visited several of Jon Cattapan’s studios over the years, I’m here to set the record straight. For starters, if there’s an audio track for his studio, it’s likely to be Captain Beefheart, Television, the Velvet Underground or one of his own Garage Band-based compositions. He plays the discs that he likes to listen to; the music of his youth, not the clichéd soundtrack of the arts documentary. And he does what many workers (including other artists) do; the reassuring background murmur of ABC talk radio is the ambient score of the studio.

That’s a minor correction. The real myth to be debunked relates to perceptions of what kind of work goes on in a studio.

In Cattapan’s case, it’s work of a relatively familiar kind. Early on, he realised that he needed to keep work and domestic space separate. Like a lot of artists, he finds that this separation creates a threshold that productively marks a transition from leisure to work. Cattapan doesn’t exactly punch the clock, but he definitely puts in something approximating a 9 to 5 day at the studio, with a commute at both ends. Establishing a work/life balance—the great psycho-economic challenge of western postmodernism—affects artists as much as anyone else. A dedicated studio, separate from the home, doesn’t mean that creativity is turned on and off at different times of the day. It simply establishes the right kind of focus on the task at hand and, perhaps subliminally, acknowledges the amount of uninterrupted time needed to undertake a particular job.

Cattapan isn’t a time and motion man. But his creative process does generate a clear work pattern in the studio. In simple terms, making a painting involves a succession of regular steps. Tinkering with a found image, often using a scanner and computer. Drawing, on a blank page or over a found image, such as a news clipping. Reiterating (but not directly transcribing) the image onto a large canvas. Making a painting relatively quickly, keeping a weather eye on drying pigment so that the right blending of layers is achieved. Producing a series of drawings is quicker but, because the separate works flow into each other visually and conceptually, the focus has to be sharp and the work rate brisk if the connections are to be maintained.

The key to Cattapan’s studio practice lies in the fact that each work connects strongly with those around it. He pursues a theme or motif across a series of paintings or drawings. He’s conscious of his persistent fascination with certain colours, proportions or moods. So no artwork can be seen in isolation. It has to literally be seen next to others. Cattapan’s studio is not simply a place where art works are made one by one. It is physically large enough to accommodate a great many older works alongside emerging paintings, so that the artist can line them up for comparison and reflection. As a corollary, the studio has to be fairly well-organised into storage, work and administrative space. It’s not entirely systematic but there’s clearly an allocation of space to specific tasks, tools or kinds of attention. A batch of new works at the business end of the space. Stacks of early work, readily accessible at the rear. A small office for computer work. A couch for the postprandial nap.

It’s a pattern I’ve seen in Cattapan’s various studios in Middle Park, Manhattan, Gardenvale and, now, in Moorabbin. The last, his current location, is the most formal. Occupying a new, tilt-slab factory in a dedicated light industrial estate might be taken as a metaphor for the condition of the contemporary artist. The pokier nineteenth century loft spaces of the inner city have been left behind for the purpose-built, small business environment of the early twenty-first century. To be honest, I think that’s stretching it. Yes, the gentrification of the inner city has wrested lofts away from artists lucky enough to snag a good lease in the 1980s. But Cattapan, like many of his generation, had reached a point where his understanding of his own work patterns demanded an open, empty space rather than the more closed, ad hoc character of a reconfigured stable or workshop. Like any good work area, this factory is a simple model of the artist’s mind space; somewhere that can accommodate old and new work alike, somewhere that shuts out the world without entirely isolating the artist, somewhere where he can choose the music. 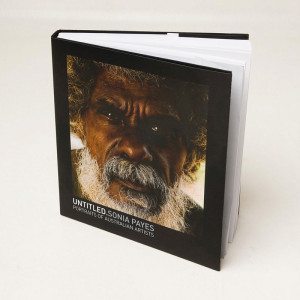 The Shilo project, 2009–10
The decline of the movie poster