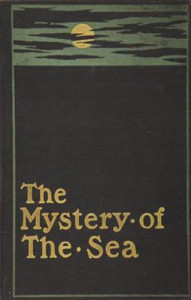 The vampire industry spawned by Bram Stoker’s Dracula (1897) overshadowed his many other novels. Some of them are indifferent but here’s a wonderful line from his The mystery of the sea (1902); the American heroine’s reply to florid wooing by her British suitor—‘You talk like a small book with gilt edges’.

Stoker’s theatrical background shows; there’s a whiff of the comedy of manners and a stab at Oscar Wilde’s drawing room wit. But there’s also a glimpse of his self-consciousness; indirectly, his plain-speaking American character chides Stoker himself, warning him to rein in his own ornate dialogue. And Stoker was quick to take up modern, especially American, words; ‘phoney’ was only a few years old when he used it in Dracula.

Stoker consistently paired the modern and the archaic, as if trying to comprehend the manifold changes in nineteenth century experience. In The mystery of the sea, an independent American woman boldly propels a tale of espionage and war-mongering. Her Scottish paramour, a lawyer gifted with the Second Sight, tries to keep pace with her. Melding modern personas with ancient superstitions, Stoker hinted that no amount of telegrams, bicycles and revolvers could render the supernatural redundant. 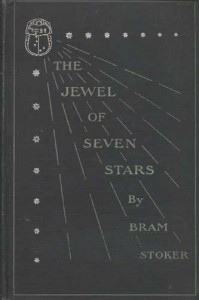 For the ne plus ultra of this form, read Stoker’s The jewel of seven stars (1903)—not the first Mummy novel, but one of the best. (The opening page reads like a prelude to a Terrence Malick movie.) Coveting the knowledge of a 5,000-year-old Egyptian queen, the modern protagonists pursue a ‘Great Experiment’—resurrection of the dead—that ends in annihilation (that is, until the publisher substituted a happy ending for Stoker’s bleak denouement).