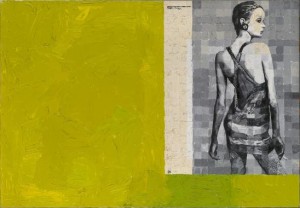 In ‘Trying to live now: chronotopic figures in Jenny Watson’s ‘A painted page’ series’, I bring together, for the first time, the six paintings in this important sequence from 1979–80. Combining gridded, painted reproductions of photographs, newspapers and department store catalogues with roughly painted fields of colour, the series combined a range of recent styles and painterly idioms: pop, photorealism, and non-objective abstraction. Watson’s evocation of styles considered dated, corrupted or redundant by contemporary critics was read as a sign of the decline of modernism and the emergence of a postmodernism inflected with irony and a cool, ‘new wave’ sensibility. An examination of the Painted pages in the context of Watson’s interest in autobiography and her association with the women’s art movement, however, reveals the works to be subjective, highly personal reflections on memory, self and artistic aspiration. Drawing on Bahktin’s model of the chronotope, this paper argues for a spatio-temporal reading of Watson’s Painted Pages rather than the crude model of stylistic redundancy and succession.

Read the full text in the online journal, Contemporaneity, vol 3, 2014, published by the University of Pittsburgh.