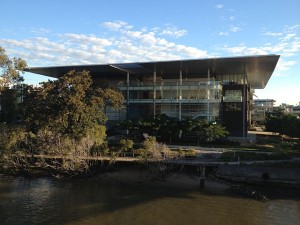 After heading up the Queensland Art Gallery (QAG) for twenty years, Doug Hall has more, and juicier, war stories than any other museum director in the country. Arriving in Brisbane in the twilight years of the Bjelke-Petersen National Party government, Hall described his political masters as pastoralists (read, ‘rednecks’) soon to take starring roles in a succession of corruption inquiries.

But Hall was adamant that the gallery’s transformation from a provincial to a global institution wasn’t simply the result of the election of a Labor government after a long conservative regime. The role of museums was changing, shifting from the affirmation of a cultural canon towards the ideas of engagement, experience and advocacy.

In his Asia-Pacific Triennial (APT) series, inaugurated in 1993, Hall can claim one of the few genuine policy-driven innovations in the Australian art museum. (As opposed to the motherhood statements about access and audience development that typically masquerade as cultural policy.) The APT combined the spirit of the blockbuster with the trans-generational goal of changing Queenslanders’s attitudes towards Asia. Where many a museum director or arts minister would be content with clicks on the turnstile, Hall used the APT to position the Queensland Art Gallery as a hub for continual cultural dialogue.

Hall acknowledged the role of Wayne Goss (premier 1989–96) in this. As premier and arts minister, Goss’s ambition was to establish culture as a catalyst for changing Queenslanders’s perception their own community. Hall’s reflection on the pattern of state premiers taking up the Arts portfolio was provocative, especially because it has been mirrored in Victoria. It’s tempting to assume that the goal of artsy premiers was self-aggrandisement; an antipodean imitation of French president François Mitterand’s sponsoring of cultural infrastructure as a monument to his own nobility. But that wasn’t going to work in late-twentieth century Australia, where Australia Council audience surveys repeatedly showed respondents declaring that cultural activities were an elite affair, not for them. In any case, Goss recognised that art exhibitions were risky and construction budgets always blew out. Culture is a wild variable, which is why realpolitik demands stable art forms like ballet, which haven’t kicked up any kind of stink for one hundred years.

New Australia Council research shows that the majority of Australians no longer see the arts as pretentious or elitist. In 1999, as Hall entered his second decade at QAG, 51% thought so; in 2013, the figure had dropped to 30%. The percentage who think that the arts aren’t really for them dropped from 35 to 13 over the same period. Analysts will likely attribute that change to the pulling of any number of different ‘policy levers’. I think that Hall and Goss showed that the foundations of such change lie in a risky, even intangible strategy; allowing the punters to recognise that changing the kind of art they see, the way they see it and the buildings they see it in, will change their community.

Doug Hall’s address was organized by the Australian Institute of Art History and was delivered at the University of Melbourne.