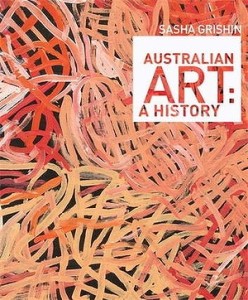 At 570 pages long and weighing in at 2.46 kilograms, Sasha Grishin’s Australian art: a history is the latest contender for the heavyweight title long held by Bernard Smith’s Australian painting. It’s a door stopper all right, but will it be a barbecue stopper? (And is there a barbecue’s worth of art historians among Australia’s beleaguered humanities departments?)

Hefty as it is, Australian art will always seem too small. National histories present the author with a vast temporal landscape. Add to this the thousands of artists from which Grishin can choose and the tension between the general and the particular becomes palpable. Every work of art is a singularity, inviting intense scrutiny. Epic national histories, on the other hand, are all fast forward and not a pause button in sight.

The story of Australian art has long been a royal road. Twentieth-century trailblazers had their prejudices—Grishin identifies imperialist, patriarchal and racist blinkers—but most of the signposts they planted are still firmly in place. At best, a new survey can add an extra lane, or invite the traveller to deviate on to a scenic route before re-joining the main highway.

Grishin’s game-changing move is to end what he calls the apartheid-style separation of indigenous from non-indigenous art and the assimilationist rhetoric that seeks to meld both within a nebulous Australianness. Instead, he argues consistently for a dialogue between indigenous and non-indigenous art, from the earliest European responses, however inaccurate and misguided, through to the elaborate webs of concealment and revelation in contemporary Yolgnu painting.

In the case of an artist such as Margaret Preston, Grishin traces a passage from early condescension, through assimilationist domestication and on into a highly conceptualised dialogue between indigenous, abstract and landscape painting. Across the breadth of his text, Grishin’s ”dialogic” approach weaves this narrative into the familiar story of colonial art, provincial modernism and stateless postmodernity.

He concludes that a ”national tradition” cannot be pinned down: ”multiculturalism, hybridity and the constant dialectic that exists between indigenous and non-indigenous art has given, and continues to give, the best of Australian art its unique and distinctive voice”.

But large-scale surveys can still be bloodless affairs; artists emerge and fade, styles wax and wane. Why Australian art is the way it is remains unresolved and yet each case, whatever the ”-ism” in question, is invariably declared closed. Grishin dismisses the Art History 101 chestnut—”Were the Heidelberg School artists Impressionists? Discuss”—by declaring that ”Impressionism, as practised by the French Impressionists, was unknown in Melbourne in the 1880s”.

Meaning that no one read the reports on French impressionism published in local newspapers and imported magazines in the 1880s? That there was no other kind of impressionism? Grishin’s conclusion—that Tom Roberts has more in common with Corot than impressionism—holds water but is based on stylistic comparison only; there’s no sense of the complex, often extra-artistic factors that shaped Roberts’ affiliation with the French master.

The inherent formality of the definitive history inhibits writers. In an ebullient promotional interview, Grishin remarked, ”Dare I say it … [Joy Hester’s] much more interesting than … Albert Tucker”. But this strongly held (and entirely defensible) opinion doesn’t, can’t, appear in his book. Grishin’s condemnations come in the form of silent exclusion; for example, the book is mercifully free of Margaret Olley’s lumpen still life paintings. The only sustained commentary on Olley comes from J. S. MacDonald, director of both the Art Gallery of NSW and the National Gallery of Victoria, who described her, a sitter in Dobell’s 1948 Archibald Prize-winning portrait, as ”fat, dress-busting … unhealthily obese … fat [again, for good measure!] and fatuous”.

I believe this is what is called, in political circles, ”deploying a surrogate”.

Here and there, I get the sense that Grishin was itching to say his piece before a tight word-limit shut him down. When he dubs George Lambert’s The squatter’s daughter (1923–24) one of ”a number of much-promoted ‘national icons’,” Grishin hints at suspicions that aren’t openly declared. Who was doing the promoting, and how? Why, in this book of all places, is ”national icon” suspended in scare quotes rather than forensically dissected?

Elsewhere, the Liberty Valance theory of history—”When the legend becomes fact, print the legend”—intrudes. Grishin, like many before him, restates Albert Tucker’s claim that his iconic Victory girls (1943) depicted teenage prostitutes fraternising with soldiers in wartime Melbourne. No evidence to support Tucker’s story of flag-clad prostitutes has been unearthed. Tucker’s biographer, Janine Burke, wrung an admission from him that, at best, he may have read something about these chimerical streetwalkers in a newspaper. My own view is that Tucker’s source was a contemporaneous movie poster showing tap dancer Ann Miller in red, white and blue.

So there you have art history as an unchallenged anecdote, as self-promoting myth, as disputed fact or as speculative hypothesis. The nightmare for Grishin, as for any author of such an ambitious text, is that the same could be said for each of the 360-plus art works illustrated in the book.

From his opening pot shots at ”frivolous, over-hyped and trite” art to his suggestion that Lambert was ”groomed for greatness … by elements in the Australian art establishment”, Grishin is sceptical of an art world shaped by ”oligarchs”, ”bureaucrats” and ”professional tastemakers”. Some claims are substantiated; Grishin cites a fan letter from Robert Menzies to Lionel Lindsay, whose anti-Semitic book Addled art he had read ”with supreme joy”. Elsewhere, the bogey of an anonymous ”rat pack” of artists, gallerists and curators in Melbourne and Sydney is wheeled out.

Grishin delivers a unique solution to this art world Freemasonry. He surveyed 80 artists, as well as curators, dealers and ”art bureaucrats”, requesting that they nominate 50 artists ”integral” to contemporary art and 50 ”for whom they held little respect”. Ten votes on either list determined the cut. All very statistically neutral but it’s hard to imagine that Grishin didn’t add captain’s picks, especially since he thanks a kitchen cabinet of senior artists in his introduction.

The results don’t deliver a history of Australian art, so much as an account of how a subsection of a professional system defines itself and imagines its enemies.

It’s a pattern unwittingly repeated in the selection of illustrations—half of which come from the National Gallery of Australia and National Gallery of Victoria—and in Tony Ellwood’s foreword, which serves as both paean to the author and an NGV mission statement.

This shouldn’t be a surprise. In the end, in spite of Grishin’s protestations, a definitive national survey must, of its nature, mirror the cultural establishment.

Early on, Grishin cites an 1847 critique of Conrad Martens that dismissed him as ”one of our standard artists”. That fate, both desirable and repellent, now looms for every artist on Grishin’s A-list.

Original publication: ‘In praise of creative dialogue’, The Age, March 29, 2014

Fernando A Flores, ‘Death to the bullshit artists of South Texas, vol. 1’
Cars, artists and culture