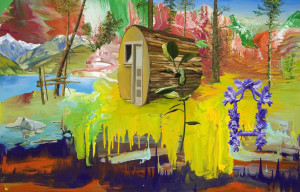 In the evening, after I had last visited Stephen Bush’s exhibition ‘Steenhuffel’, I set about reading M P Shiel’s 1901 novel The purple cloud. I mean it to sound like a job of work; the book is the sustained ranting of the last man living, a descent into madness larded with arcane language and page-long paragraphs. (Pop quiz: ‘umbrageous boscage’ refers to … ? Anyone?) 1

Returning from a years-long expedition to the north pole, the protagonist discovers the mass extinction of humanity. He wanders an eerily still world, stumbling over cadavers all the way. As he sails into a Norwegian fjord, he describes what could be the landscape of Stephen Bush’s paintings:

I never saw water so polished and glassy, like clarid polished marble, reflecting everything quite clean-cut in its lucid abysm, over which hardly the faintest zephyr breathed that still sun-down; it wimpled about the bluff Boreal, which seemed to move as if careful not to bruise it, in rich wrinkles and creases, like glycerine, or dewy-trickling lotus-oil … all seemed caught-up and chaste, rapt in a trance of rose and purple, and made of the stuff of dreams and bubbles, of pollen-of-flowers, and rinds of the peach.

Uncanny really, both Shiel’s writing and its parallels with Bush. Who knows what ‘clarid’ means (it’s not even listed in dictionaries of archaic language) but ‘wimpled’—wrinkled, rippled, involved, intricate—is just the word for the lurid lava flows of pigment upon which Bush erects his alpine fantasias.

I suppose it’s fitting to find Bush’s epic, psychedelic terrain echoed in Shiel’s text. Both seem to traffic in hyperbole and implosion. Or, as Shiel would put it, both have that ‘blank stare of Nirvana and the lunacy of Nothingness wherein Time merges in Eternity, and all being, like one drop of water, flies scattered to fill the bottomless void of space, and is lost’.

Save for one significant difference. Bush’s wimpled rivulets of colour aren’t there to evoke a ghastly gothic mood, they’re the foundations of his paintings. What’s at stake is less the rhetorical effect—the incipient horror of the informe—than the material and structural resonances of Bush’s fluid grounds. Their consistent appearance across so many works suggests that for Bush they mark the beginning; they are the marbleised ground against which the figure, and the figurative, can emerge.

I’m reminded of da Vinci’s suggestion, in his Treatise on painting, that throwing a sponge impregnated with colours against a wall might deliver something like a landscape, hinting at figures, rocky scenes and woods. In this version of beginning, form and space emerge in a process of imagining.

But Bush goes further, he dwells at length on the random. Look at the grounds of his paintings and you can read the actions embedded in drips, pools and rivulets. Here he tilts the canvas sideways, there up and down. Here he swirls and mixes, there he allows a layer to dry before adding another.

In this extended prelude, Bush fiddles with his grounds in ways that insist on the material qualities of his paint. For at least a decade, Bush’s works have been essays in viscosity. Of course all paintings are, to the extent that they rely on paint’s transition from a fluid to solid state. But in Bush’s paintings, viscosity is the always-visible ‘screen’, shaped by gravity and surface tension, upon which the over-determined symbols of Man, the World and the Sublime are arrayed.

So when Bush wimples pigment, he makes the tension between potentiality and materiality the foundation of his paintings. Any stain, splash or flow might become a landscape or scene. But equally, paint’s materiality is such that it seeks out the random—it flows, runs, mixes … Not so much imagination run riot as fatalism; the paint just keeps moving.

To resolve this tension paint must be activated purposefully, rather than left to its own randomizing materiality. The paint brush—which shapes and manages paint—is the requisite tool. And it, too, is writ large in Bush’s work. While the ground is a poured, liquid field, the figure is always built with brushstrokes. Pigment, to borrow Shiel’s analogy, is the ‘stuff of dreams and bubbles’. Bush, like his explorers, farmers and engineers, works hard to mould de-differentiated materials into tangible form. But his grounds will always threaten to swallow, erode or dissolve form. Which is why Bush’s painting leave us standing on the brink of a lucid abyss.

Doug Hall, ‘Wreckage and reclamation: politics and art in Brisbane 1987-1997’, 3 June 2014
I’ve got some good nudes and some bad nudes: Norman Lindsay and Lucian Freud