Reviewing Barry Pearce’s catalogue/biography for the 1995 Brett Whiteley retrospective alerted me to two themes that I’ve circled around on-and-off ever since. First, that a good deal was being missed in looking art Australian. Visiting the exhibition itself, I realized that many elements visible in the art works—texts, collage elements, marginal images—were being over-looked. And second, that the desire for to identify iconic Australian artists meant that the artists’s own ambiguous relationship to aspiration and ambition was set aside. All round, there’s a good deal of breezing over the first and dodging the second; Whiteley is simply the most egregious example.

‘The greatest obstacle to appreciating the art of Brett Whiteley may be his life and his death.’

In the opening sentence of his contribution to Brett Whiteley: art & life, Barry Pearce admits to the fundamental problem that haunts the book. What is at stake is the legitimacy of Whiteley’s fame, as a consequence Art & life endeavours to rescue the artist from the ruinous condition of media celebrity. But as Pearce, Bryan Robertson and, to a lesser extent, Wendy Whiteley, attempt to save Whiteley from himself they do far more than strip away the more egregious excesses of anecdote, rumour and legend. Ultimately their efforts to retrieve Whiteley for art and to exorcise his media notoriety sidestep the issue crucial to his work (and to the late-twentieth century artist in general), the question of celebrity itself. The result is a lush and detailed text which is remedial rather than positively revisionist. 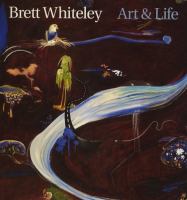 Faced with an artist whose oeuvre was as much a series of events and scandals as it was a corpus of art works, Pearce has two immediate options. He can accept Whiteley’s thoroughly mediated condition, following the ‘postmodern’ path epitomised in the remark made at the conclusion of John Ford’s The man who shot Liberty Valance—when the legend becomes fact, print the legend. Or he can demand a return to first principles, a back-to-basics restitution of the uncorrupted fundamentals of the art works themselves. Though he leans towards the latter course, Pearce’s solution is something of a compromise; if there is to be a legend, he seems to say, at least let it be an art historical one.

But a return to Whiteley’s art, to art history, or to the museum, cannot expunge the legend; the very art works themselves trumpet the fusion of self, style and spectacle. Indeed, I would argue, Whiteley self-consciously forged his art out of these ingredients from the late 1960s onwards. In any case, the desire to separate Whiteley’s art from his legend is itself disingenuous. The book itself, and the exhibition which it accompanies, only serve to amplify his fame. Likewise, Art & life is shot through with anecdote and reminiscence, while the reader wades through 14 consecutive frontispiece images of the artist before arriving at the text.

Of course it is impossible for me to evade the Whiteley legend either; as I write Whiteleymania runs rampant in colour supplements, lifestyles magazines and the infotainment media. But where I think I differ from Pearce, and where I think a more telling reappraisal of Whitely might take place, is that I am prepared to accept his notoriety as point of entry rather than as an obstacle. In a recent study of celebrity in the United States, Joshua Gamson remarks that the phenomenon centres on the synchronous but conflicting notions of greatness (a legitimate, deserved, even virtuous fame) and artificiality (the contrived profile concocted by PR machinery).1 To lament Whiteley’s celebrity is effectively to defend the notion of virtuous fame, perfected in the humanist culture of Renaissance Italy, against the bastardised, superficial celebrity of the late twentieth century. Humanist genius is pitted against the machinic fame of Warholian culture.

Yet it would make more sense to understand Whiteley as acting out this two-fold dissonance of fame, for it is precisely here that he most effectively embodies the condition of the late-twentieth century artist (rather than the late-nineteenth century artist his epigones would have him be). In effect, for me, the problem is not one retrieving Whiteley for art, nor of establishing the quality of his work, but of exploring this and other instances in which he allows a re-reading and reconfiguration of the status of the Australian artist in what might be called a post-Antipodean context. The unease that Pearce, Bryan Robertson and many other commentators have with Whiteley’s notoriety is symptomatic of an inability to acknowledge that art has entered a post-humanist stage in which its mediation becomes a significant component of artistic practice. Whiteley’s tragedy, then, was not so much his fame as his inability to adequately command it or reconcile it with his countercultural romanticism.

Reading Art & life, I repeatedly felt that the problem with Whiteley was not so much his ‘life and death’ but the inability of art historians to come up with a mode of interpretation adequate to it. The problem with Whiteley is that he took certain established discourses (bohemianism, transgression, romantic subjectivism) and reconfigured them in ways rendered conventional art historical readings of them awkward, if not impossible. His bohemianism was closer to the hippies’s Haight-Ashbury than the artists’ Paris, his romanticism more that of the pop star than the poet, and his travels more those of jetsetter than a gipsy. The problem with Whiteley is art history’s problem, its inability to come to grips with the transmutation of nineteenth-century vanguardism into mass cultural simulation.

What is striking is the distance that both Pearce and Robertson seek to place between art and mass culture, a distance that Whiteley repeatedly and determinedly collapsed. Robertson remarks that one was just as likely to hear Dylan as Vivaldi playing on the hi-fi in Whiteley’s London studio; clearly he wishes that the artist had stuck with the latter. In making the point Robertson reveals the crux of the problem; he explicitly acknowledges that ‘artists were increasingly being accorded the status of pop stars’ (p.13-14) yet cannot see that this ‘dilemma’ might been exactly the circumstance in which Whitely figured his cultural identity. Robertson sees it as a choice between Vivaldi and Dylan, Whiteley straddles both; the art historian sees the modernist ‘either–or’, the artist the postmodern ‘both–and’. Given his fusion of Rimbaud and Dylan, Van Gogh and Timothy Leary, the museum and the street, romanticism and Zen, the ‘natural’ place for Whiteley within the art historical canon is beside Pop art, rather than the subjectivist figuration of Francis Bacon. Whiteley was frequently associated with Pop art early in the piece; at least two reviews of his first solo exhibition in London paired him with a current Larry Rivers show. A serious attempt at rehabilitating Whiteley might follow this connection.

Two figures thread through the book: superficiality and excess. Pearce has constantly to name Whiteley’s demons in order to exorcise them. His negotiation of the latter again points to the ‘either–or’ logic which closes off the possibility of understanding why Whiteley is such an awkward artist. Excess is accepted when it is assimilable to such orthodox art historical tropes as the bohemian, the shaman, or the martyr. But Pearce cannot countenance the other version of excess haunting the Whiteley myth; the excess of mass culture with its depthless, lateral expansion and its hollow amplification. Faced with the gargantuan The american dream (1968–69), Pearce can dub it, almost shamefacedly, as ‘absurd’ (p 31), without reflecting on the way that it cinemascopic spectacularity, stretching the painted surfaces into an impossibly thin membrane whose transparency reveals no flesh beneath it, might indicate the dawning realisation of the impossibility of a painting being ‘of’ something in the conventional sense.

I am no apologist for Whiteley but I am struck by the fact that the writing on him is frequently more banal than his art ever was. It is tiresome to have Whiteley’s nudes spoken of, again, as sexualised exercises in painting-as-if-to-possess. The allusions to Degas and Matisse are made once more, serving the usual purpose of stylistic analogy and art historical affiliation, without any reflection on the substantial reconsiderations of the decorative body in the work of those artists by Eunice Lipton, Tamar Garb and Roger Benjamin. Whiteley himself seems to have been conscious of the need to consider the erotics of the artist-model relationship. His Christie series must surely have made in a conscious juxtaposition of Whiteley’s own virile mastery of the nude and the murderer’s impotence. Paintings of a man known as ‘Can’t-Do-It-Christie’ and ‘Reggie-no-dick’ (epithets that Whiteley himself inscribed on one of the series) might then be read as a meditation the artist’s own status as ‘Can-do-it-Brett’.

It seems to me that the time has come to recognise that what are termed Whiteley’s failings are more likely those of an art history bent on assimilating him to a discourse that his very work shows to be redundant. There are still ample grounds upon which to question Whiteley’s reputation but the possibility that his work and his celebrity redrew the parameters of such status should not be forgotten, or worse, wished away. The greatest obstacle to understanding Whiteley’s work, then, might be that it was made at a time when one version of understanding (modernist autonomy of art, the romantic vision of subjective aesthetic agency) was collapsing, and another (postmodern intertextuality, mass media simulation of reality) taking its place. Now that the dust has settled, Whiteley’s celebrity might be more effectively read as an instance of symbolic exchange, his eclecticism as a nascent version of postmodern hybridity, his egoism as a version of countercultural vitalism, his fall from grace as a function of the hegemony of post-studio vanguardism, and his banality as a product of his retreat into the safety of his own publicity.

Guerillas, poseurs and nomads: the politics of the avant-garde in art and music
Keep on rockin’ in the art world, 2001