This paper was delivered at the conference ‘Contemporary outsider art; the global context’, University of Melbourne, 24 October 2014. Along with many other speakers, I was responding to the suggestion that outsider art is now ‘in’. 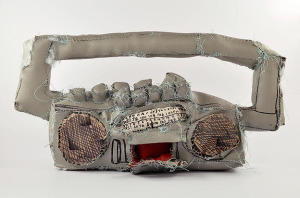 Late in the twentieth century, Arthur C Danto spoke of the ‘selective enfranchising’ of outsider artists. 1 Such mainstreaming has ballooned since then. Today, we are in the midst of a collective enfranchisement.

In the principal exhibition of the 2013 Venice Biennale, curator Massimiliano Gioni introduced outsider artists, along with mystics and non-artists, in order to ask ‘who has the right to be inside and who has the right to be outside, and also who is really the outsider in the conversation’. 2 Or, as the BBC put it, outsider artists—‘the latest art world fashion’—had been invited to the party. 3 The inclusion of outsider artists alongside those with conventional professional track records is now a feature of grand surveys of contemporary art; for example, the Whitney Biennial (2012) and Melbourne Now (2013).

As Lynne Cooke suggests, the outsider is defined from the perspective of the viewer. 4 The incorporation of outsider art into global contemporary art has more to do with the needs of the centre rather than with the claims of the periphery.

More than a manic market spectacle, contemporary art embodies an historical impasse. Forming in a post-progressive global context, bereft of master narratives and adrift in an atemporal field, contemporary art seeks to reconfigure its critical and resistant capacities. Artists and theorists imagine a renewed progressive culture in terms like ‘imagination’, ‘expansiveness’, ‘the unexpected’ and ‘the impossible’. The title of the New Museum of Contemporary Art’s 2012 triennial—‘The ungovernables’—signals the centre’s renewed desire for a status once accorded to the avant-garde and still held by outsider artists.

What outsider art now represents to the centre is a function of significant philosophical and conceptual changes in the constitution of contemporary art. Writing in 1997, Danto argued that Andy Warhol’s Brillo boxes (1964) had collapsed the difference between art and not-art, between an object and its representation in art. With this, a narrative shaping art’s philosophical identity—a calculus figuring relations between real and represented—came to an end. ‘There was no special way a work of art had to be’, Danto concluded. ‘Artists were liberated to do whatever they wanted to do’. 6

There is, theoretically at least, no outside anymore. If anything goes, everything is in. In an expanded field, art’s terrain extends indefinitely, its boundaries disappear over the horizon. Declaring a centre is an arbitrary, instrumental exercise; an exercise of power, a naked land grab. The periphery is less distant, in relative terms. In a fluid field, centre and periphery might find themselves adjacent to each other.

Of course, certain manifestations of contemporary art are still preferred over others. As curator Simon Sheikh notes, ‘in the current economy of experience, art is expected to deliver the unexpected’. 7 But with museums increasingly shaped by the experience economy; the hallmark of contemporary art is the commodified carnival, epitomised by the sideshow alley installations of Carsten Höller. Danto’s radical expansiveness is subsumed within the figures of surprise and novelty.

Ideally the unexpected can be more than a momentary buzz. It can be redemptive, challenging, perhaps even a threshold to other worlds. As philosopher Reinhart Kosselleck suggests: ‘Only the unexpected has the power to surprise, and this surprise involves a new experience. The penetration of the horizon of expectation, therefore, is creative of new experiences’. 8

In this contest between the novel and the genuinely new, between expectation and something that exceeds it, outsider art is a surrogate for the desires of a disenfranchised avant-garde. Outsider art offers the promise of an elsewhere that goads contemporary art to penetrate the horizon of expectation.

Critical reflections on contemporary art tend to acknowledge its spectacular forms—ballooning prices, oligarch investors, jet-set events—before seeking to reinvent resistance and renewal within a complex and constrained context. The essential question becomes: Is there a form of contemporary practice that transcends the machinations of a global art market and challenges the cultural manifestations of post-Cold War triumphalism? As curators and critics set about answering that question, outsider art begins to look like a solution, something like what curator Simon Sheikh called a ‘vector of the possible’.

The boundary, the limits of contemporary cultural structures, becomes a key preoccupation. Beyond such limits, according to Sheikh, ‘Change emerges … It reveals itself in the creation of other ways of instituting, in establishing another horizon’. 9 ‘[T]he task is not just saying the same things with new words, but rather the creation of a new language’. 10

The boundary offers the promise of productive difference, rather than simply the novel and unexpected. It is ‘an image that demarcates the possible and the impossible, what can be seen and what cannot; as a metaphor for both the limits of our vision and the expansiveness inherent to artistic and creative thinking’. 11

Outsider art can embody that metaphor and such aspirations. It is visionary, imaginative, expansive. It sees what others cannot. It usurps or stands beyond limits. It embodies a position beyond the contemporary. And it represents a workable, contained version of Danto’s free for all. It stabilises the extension of art’s frontier. Its expansion is not absolute—it remains relative to the formalised, professional, institutional and social status of the contemporary artist. And yet it is ideal—the outsider’s imagination represents art’s capacity to conceive of other worlds.

As such, outsider art is a surrogate for the renewed utopian aspirations of the contemporary. Theorists of the contemporary insist on imagination as a figure of agency and resistance: ‘what we so unproblematically call the “artistic imaginary” is in fact an indication of the presence of (new) possibilities … that society seems to have resigned from seeking’. 12 The artistic imagination offers ‘something perhaps even not yet imaginable, obscured, or indeed declared impossible by the dominant order’. 13

Outsider art, which already takes its dreams, or nightmares, for reality embodies that imagination. Escaping both spectacular novelty and melancholic lassitude, it is exhibited alongside mainstream contemporary art as an ecstatic affirmation of art’s capacity to be beyond.

Outsider art offers the utopian figure of the not-yet; an updated version of Ernst Bloch’s philosophy of hope, which posited that Utopia rested latent within history as a tangible potentiality not yet realised.

In more simple terms (and curatorial effects are not always as complex as we assume), the exhibition of outsider art within major contemporary art platforms allows for the thematizing of art’s possibility, of the contemporary’s aspirations, of a curator’s desire for the not-yet. All the more so when the work is an insider’s representation of an outsider’s work, as was the case with Aurélien Froment’s photographs of the work of Ferdinand Cheval in the 2104 Biennale of Sydney.

Outsider art, which used to be allowed a family resemblance to aesthetic revolutions (such as surrealism and expressionism), now stands as a benevolent parent to contemporary critical strategies in art. Many of the principal gestures of outsider practice are now mimicked by mainstream artists.

Contemporary art turns towards models of world-building as a form of resistance. The formation of social spaces and relations reflects the aspiration towards a space beyond the horizon, towards the not-yet. Contemporary art often models the possibility of other worlds in spatial practices: quasi-architectural environments, installations, architectural interventions, spaces into which subjectivity is invested through process and ritual. Some of outsider art’s classical procedures—fantastic architecture, processional landscapes, monomania, geographical isolation, task-driven practice—now look like a version (a natural version?) of the contemporary.

Where modernism took a romantic vision of the outsider as a natural imagination, a visceral or unmediated creative force, the contemporary discovers an ideal form of process in outsider art. Outsider art models a cure for the redolent instrumentalism of the contemporary.

Contemporary art is a globalized field whose centre is everywhere and circumference is nowhere. As Michael Hardt and Antonio Negri remark, ‘One primary effect of globalization … is the creation of a common world, a world that, for better or worse, we all share, a world that has no “outside”’. 14

But this radical inclusiveness offer no ‘penetration of the horizon of expectation’, no ‘new experiences’. So a globalised contemporary art still searches for versions of the outside. A common trope in contemporary art is the seeking out of marginal, vestigial and pre-modern communities. Preferably these are distant, quasi-folkloric communities shaped by geographic isolation and featuring exotic forms of communication and ritual. (For example, Angelica Mesiti and Joy Gregory’s documentation of the whistling languages of island cultures in separate video installations.) These exemplary realms resist (rather than deny or ignore) the modern, often through a performative culture.

The outsider, and especially the outsider environment, is the aestheticized distillation of such pre-global dreaming. Outsider art—especially in its environmental forms—offers the idea of an art of place, locality and subjective experience. Art is connected to site and lived experience. The self is inscribed into locality, often in intense, ritualistic, extended practices.

The contemporary is staged in an incessant present; there is no escaping its system, no revolutionary overthrow of its structures, no master narrative promising a rosier future. As Boris Groys suggests, ‘Art begins to document a repetitive, indefinite, maybe even infinite present—a present that was always, already there, and can be prolonged into the indefinite future’. 15

Outsider art appears to rehearse solutions to this dilemma by revaluing the suspension of time in an infinite present. The outsider artist frequently manifests an egregious consumption of time; the work is visibly time-consuming, cumulative in nature and perennially in progress. But where contemporary art thematises stasis, unproductive work and wasted time, outsider art promises the reverse. Outsider art, especially that structured around relentless process, makes the suspension of time or the duration of the present a positive. Time folds in on process; repetition is not so much a figure of wasted time as time invested, at compound rates, in the articulation of the subject in process. There is no such thing as wasted time, there is always work to be done, time to be spent without delay or indecision

The recent enfranchisement of outsider ort is a function of the dilemmas with which contemporary art is confronted. Contemporary art occupies an expanded field, but fears a world with no outside. It recognises global reach while still craving place. It is caught up in an atemporal hover culture, while desiring vectors of possibility.

In its enfranchisement of outsider art, it is possible that contemporary art engages in an intricate begging of the question. Art may be anything and yet one must always know that one is in the presence of art in order to understand the character of this anything.

Jacques Rancière summarises the tangle thus: ‘That the Same is the opposite of the Other is readily intelligible. Understanding what this Other is is less straightforward. In the first place, by what signs is its presence or absence to be recognized?’ 16

What I have described is a situation in which the Same (the centre, contemporary art) sees the signs of the Other (outsider art) in and through its own desire. The Other is the desire of the Same for its own salvation, what contemporary art would hope to be but knows as the not-yet.

The difficulty in outsider art’s attraction for the mainstream lies in its presence and absence as a cultural horizon. It is, as Peter Osborne says of the horizon itself ‘phenomenologically immanent but infinitely receding’. 17