‘Fringe to famous’ is an ARC-funded research project examining the crossover between ‘alternative’ and ‘mainstream’ Australian cultural production since the 1980s.

The principal research partners are:

Tony Moore: Senior Lecturer in the School of Media, Film and Journalism at Monash University, Australia

Mark Gibson: Director of the Film, Media and Communications Program in the Monash Institute for Graduate Research

Chris McAuliffe: Honorary Fellow in the Australian Centre, School of Culture and Communication at the University of Melbourne

Maura Edmond: Research Fellow in the School of Media, Film and Journalism at Monash University

Louise Sheedy: PhD candidate in the School of Culture and Communication at The University of Melbourne 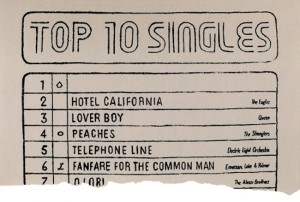 ‘Alternative’ and ‘mainstream’ are often understood as opposites, with any movement between them disparaged as ‘selling out’. However, the relationship is much more complex. Small subcultures, fringe arts practices, ‘indie’ media spaces and the like provide crucial opportunities for creative experimentation, risk-taking, no-budget amateurism and the space to learn from failure. And when underground artists move into the mainstream they bring with them new ideas, approaches and audiences, which are vital for aesthetic innovation and re-invigoration.

Using recent historical case studies in popular music, film, broadcast, comedy, graphic design and videogames, ‘Fringe to Famous’ asks: How do artists successfully transition from ‘fringe’ to ‘famous’? What conditions encourage or stifle this exchange? What benefits does it generate? And how can we better support it in the future?

For detailed information, visit the ‘Fringe to famous’ website.

Why a record review in an art magazine?: Paul Taylor and new wave
Tony Clark on the opportunity shop