This piece was written for an auction house catalogue for the sale of the Grundy collection of Australian art in 2013. It gave me an opportunity write at length on a painting I’d touched upon briefly elsewhere. It’s funny how the more iconic a painting becomes, the less detailed appraisals of it are. The painting was acquired by the Art Gallery of New South Wales.

While Collins St, 5 p.m., 1955, is regarded as Brack’s signature painting of the 1950s, The new house is, in its own quiet way, a more emphatic declaration of Brack’s views on the prospects for Australian culture in the Menzies era. A softly-spoken manifesto in paint, The new house quietly unites autobiography, art theory and cultural criticism.

In The new house, Brack boldly tackled the question of what Australian art could be in the 1950s. His answer, both sophisticated and sceptical, emerged from his own passions as an artist, his observations of his suburban environment and a rather jaundiced view of the art of his peers. The painting aggressively dispensed with the two most obvious options at the time; epic, folkloric figuration and cosmopolitan abstraction. Bushrangers and explorers were replaced by the new pioneers, the young home buyers of the suburbs. As for abstraction, it had become generic, spreading ‘all over the world … like suburban villas’, Brack declared in a lecture delivered at the University of Melbourne, October 1953.

For Prime Minister Robert Menzies, the home was the bedrock of the Australian way of life: ‘homes material, homes human, homes spiritual [were] the foundation of sanity and sobriety’, he had pronounced in his 1944 book, The forgotten people. For Brack, such thinking presented a broadly cultural rather than narrowly political challenge: if the Australian spirit was now urban, materialist and domestic, what place was there for the experimentation and effrontery of art? 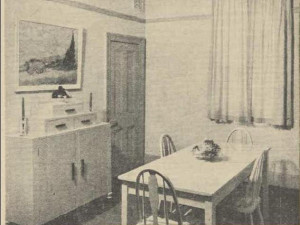 ‘Gay notes were introduced by … the colored Van Gogh print on the wall over the sideboard’; decorating advice in the Women’s Weekly, 24 July 1937.

Brack’s answers, in paint and in print, revealed an artist concerned that a simple embrace of modernism would not do. What meaning would romantic images of outlaws and impastoed explorers in extremis have in a culture that had domesticated an outsider like Vincent Van Gogh? As Brack remarked in a 1953 Council of Adult Education lecture, ‘no one today is shocked by Van Gogh—reproductions of his pictures fill the land’. And there above the mantelpiece of The new house hangs a reproduction of Van Gogh’s Langlois bridge, 1888; a challenge not only to contemporary acolytes of agonistic modernism but also to Brack himself, whose Damascene moment as an aspiring artist had been an encounter with Van Gogh prints in a Melbourne bookshop. The houseproud petit bourgeois depicted in the painting embody the narrow, self-satisfaction of suburban culture. But equally, the self-satisfaction of the avant-garde, content to tend the flame of the very romanticism that had been tamed by consumer culture was at issue.

Suburban life, too, made promises that could not easily be kept. Annual spending on housing fluctuated in the 1950s and aspiring home owners could not always be certain of the availability of loans, materials and tradesmen. Once colonised, Melbourne’s new suburbs revealed the inadequacy of infrastructure planning. Companion pieces to The new house, such as New houses and The unmade road, showed subdivisions threaded through with muddy, unpaved streets. Brack’s paintings echoed the laments of prominent architectural critic Robin Boyd, who complained of the aboraphobia of treeless suburbs, the lazy design of architect-free estates and the mud-spattered clothing of the commuter.

If, in Menzies’s view, the heart of Australia was located in the home, Brack set about checking for a pulse. The happy couple in The new house occupy an austere interior; they are aspirational, by all means, but whether they will be rewarded is another matter. It is a house, after all, not a home. A house is a purchased dwelling, a unit of housing, a roof over their heads rather than a repository of rich familial bonds. 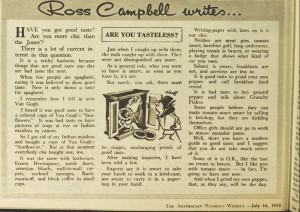 Time, an over-looked motif in Brack’s art, introduces a subtle commentary on the character of Australian culture in the 1950s. It is marked directly by the clock on the mantelpiece; we witness perhaps, at 1.25pm, a post-prandial embrace after the successful delivery of the Sunday roast. It registers, indirectly and evocatively, in allusions to time’s flow. The spindly daisies beside the clock must soon wilt; paired with a mechanical timepiece, they are a lyrical memento mori. The decor of the room speaks of another order of time; it is slightly out-of-date, implicitly contrasting the modernity of photographic spreads in home-maker magazines with the tag-along reality of the thrifty suburbanite. Even the Van Gogh print evokes this domestic struggle with timeliness: fashionably ‘ahead of the curve’ in the late 1940s, the post-impressionist reproduction was a dated cliché by the mid-50s. Humourist Ross Campbell lamented that he had rushed to change his decor when he ‘heard it was good taste to have a coloured copy of Van Gogh’s Sunflowers . . . but at that moment everybody else bought one, too’. 1

And there’s the nub of it; keeping up. The young homebuyer strives to keep up with modernity, to make a home of the kind awarded a prize by the Women’s Weekly in April 1951, with an L-shaped lounge, Danish candlesticks, turquoise walls, a print of Van Gogh’s Sunflowers and maybe one of Drysdale’s ‘out west’ drawings. But they can’t attain such heights, and fall back on the Van Gogh print, alone there on a wall complying with the Cream Australia Policy, framed by the dilute Art Deco and trickle-down Arts and Crafts of 1940s furnishings.

But were Australian artists keeping up any better, Brack asked? To retreat into Outback mythology was to ignore Australia’s modern urban trajectory. To take up abstraction was to subscribe to templated modernism. And to revive expressionism and surrealism was to return to version of modernism completed decades earlier. Brack encapsulated this dilemma in The new house (and, in the same month that he exhibited the painting, declared his position in that lecture at the University). He was to spend the rest of the decade painting his way towards a solution.