Ostensibly, this piece is a reflection on football fans. But really it’s about how I live my life. No Nick Hornby-style meditations; it’s just some stuff that happened.

Forget the prognostications of pundits and statisticians, omens are the crux of any football prediction. With the Grand Final looming, they count for more than at any other time of the season. We’re told that the makeup of this year’s final four divides us into Romantics (those dreaming of a meeting between St Kilda and Footscray, the two single-flag teams) and the Realists (those swayed by the powerhouse status of Hawthorn and Geelong). But we soothsayers of the stadium know that the distinction is false; mystical calculations shape the actuality of the contest, romanticism is the reality of football.

The deployment of omens in the psychological battlefield of the stands is an essential skill for any football fan. I was confident that Collingwood would beat St Kilda in round 8 this year because my seat was number L7. The Los Angeles girl-grunge group of the same name had nothing to do with either team but it meant I could hum ‘Pretend that we’re dead’ whenever St Kilda floundered and ‘Shitlist’ every time my wife—a Saints fan—entered another of their errors into her Football Record stats sheet. My persistence in this seemingly pointless ritual gave flesh to ephemeral form of the omen and guaranteed the nine point win.

The real trick is to give some structure and regularity to the omen, so that it becomes causal rather than casual. Sometime in 1994 my wife came home with a clump of grass from the Moorabbin Oval in her handbag. It must have been after a practice match because St Kilda had begun playing home and away games at the Waverley stadium the year before. Stephanie was a member of the small but vocal ‘Keep the Saints at Moorabbin’ posse but I guess she’d seen the writing on the wall. It was time to snag a memento before the ’Bin was ploughed under. 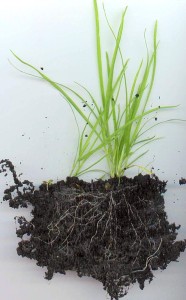 Alongside splinters from the True Cross, a lump of hallowed turf from a revered playing field is a standard pilgrimage souvenir. But for Stephanie, a confirmed anti-lawnist, this was an unusual trophy. To her, lawn was a useless extravagance. It took up valuable growing space that could be better devoted to vegetables or herbs. Principle was quickly set aside when the Moorabbin turf began to wither; its death might translate into some kind of jinx on the Saints. So, against Stephanie’s better judgement, it was planted under the oleander, beneath the bedroom window.

I was probably more of a lawnist myself. Not pathological, more a matter of a doting dad, ever vigilant for bindi-eyes and syringes, looking on as his daughter gambolled barefoot on spongy grass. But that’s not why I brought a clod of lawn home from a Collingwood game at Victoria Park a few weeks later. No, there was territory to be defended. The front lawn couldn’t be ceded to the Saints without a fight.

Back then, the transplantation process was pretty simple. Anyone could jump the boundary fence after the second siren and, at a time when winter actually meant rain, it was easy enough to scoop up a pocketful of grass, roots and soil. Living with the act was harder. For days afterward I was haunted by nightmares in which an ashen-faced Tony Shaw [Collingwood coach] informed sombre journalists that star recruit Nathan Buckley was out for the season, having tripped in a small hole just inside the boundary line in front of the scoreboard and done his knee. ‘The curator just can’t explain it . . . looks like some kind of rabbit hole . . . we’re reviewing surveillance footage . . . ’

The Victoria Park specimen was immediately planted next to the one from Moorabbin. Disputes over the superiority of our respective teams could now be settled scientifically by walking into the front yard, carefully scrutinising the lawn, and judging which of the two transplants was growing faster and further than the other. And, as game day approached each week, we could read the blades of grass like tealeaves, seeking portents of our team’s chances in the vigour of their respective sods.

At least one friend was horrified; ‘That’s so competitive’, she gasped, after I’d recounted the story in a speech at our wedding. And here was I thinking the intertwined turf was a touching metaphor for our marital bonds. Competitive! That was nothing. At the St Kilda-Collingwood clash of round 12, 1992, as Stephanie struggled to the top of the Olympic Stand, nine months pregnant, she turned to me and puffed, ‘They’re playing for our unborn child’. St Kilda by one point and a week later red, white and black booties were being fitted onto my daughter’s pink, wrinkled feet.

One point is the magic margin for St Kilda supporters. It made it hard to argue with my wife’s logic and surprisingly easy to justify my acquiescence to other Collingwood fans. By the same token, Saints numerology made it pretty difficult when we took a trip along Route 66 a few years later. I’ve learned the hard way that the purpose of omens, totems and other shamanistic tools is not so much to affirm your faith as to torment the unbeliever.