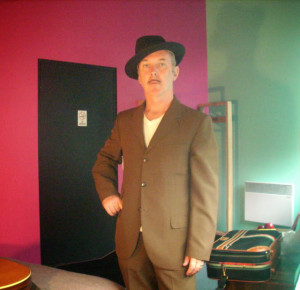 As a performer, Dave Graney has always made a rod for his own back. The wry lyrics, sharp threads and acerbic between-song patter make it too easy for his audience to see his performance as some kind of pastiche. Here he’s a posturing rock god, there a laid back hipster; one moment a falsetto-voiced crooner, another a world-weary troubadour. There’s always a lot of laughter at a Graney show but I sometimes wonder if the audience is laughing at a gag that he isn’t really pitching.

There is a studied quality to Graney’s performance, an insistence that whatever you see on stage—beat poet, bohemian, artiste—is a contrivance. An audience schooled in camp sees the nudges and winks as an affirmation of their lingua franca, postmodern irony. And there’s the rub; the audience, in Graney’s own words, are just too hip, baby.

Sure, Graney performs self-consciously. He ‘does’ the introspective singer-songwriter bit; the twelve-string acoustic guitar sounds great but also reeks of Greenwich Village coffee shop. Graney milks the magical status accorded him by a 30cm stage-riser and a few coloured lights but not so he can wrap the whole gig in scare quotes; he’s there because he believes in the performance.

Getting Graney—as opposed to getting a joke he’s not telling—is a matter of understanding the nature of his belief. It’s not the blind faith of the Broadway trouper, or the method actor’s self-hypnosis; Graney’s belief has more in common with Harry Houdini’s idea of the ‘honest magician’. Simultaneously an illusionist and a debunker of con-artists, Houdini based his performances in diligent deceit. There was, he insisted, a ‘right way to do wrong’.

When he takes the stage, Graney juggles the same contradictory elements, looking for the right way to do pop, jazz and folk wrong. (And the quest begins right there, in Graney’s insistently uncool embrace lost genres). Songs from the new album, Fearful wigging, seem at first like a swan dive into singer-songwriter sentimentality. ‘Country roads, unwinding’ is a languid antipodean take on Kerouac. ‘How can you get out of London?’ is a strange mixture of upbeat Swinging London and melancholic Alain-Fournier. But these are the territories (memory, sentiment, longing) and the genres (diary, travel writing, memoir) that generate Graney’s particular illusion, the performer.

What’s essential to Graney-the-performer is that, like Houdini, he pursues the illusion as a process, not as a hollow deception, a bubble to be burst with a sly ‘voilà’ at the end of each song. Watching Graney closely, reflecting on the way he exercises sentiment or persona in each song, you can see this process unfolding. As Graney himself says, ‘”I” is the person who is thinking “me” up and fronting it to “you”’.

This approach to performance was front and centre in Graney’s ‘Point blank’ shows at the Butterfly Club some years back. In a space even smaller than the Bridge Hotel’s back room, he asked what it was that made him want to perform and what he hoped to get out of it. The honesty of those performances rested on his sheer vulnerability; the stage was only one remove from the confessional. Now, honesty is more a case of openly declaring how he builds, and offers, his persona in a song.

Read Dave Graney reflections on Fearful wigging at his blog.