I spent April 2010 as a writer-in-residence at Art Vault, Mildura. I’m not a regular theatre-goer but a production of Shakespeare’s ‘Taming of the Shrew’ at a small football club in nearby Nangiloc was tempting. The production was directed by Fiona Blair for The Old Van & NCDCA. The performance was at the Nangiloc Football Oval, 16th April 2010. I wrote the review in the spirit of the play and learned that writing can be a lot of fun if you relax. When it was published in the Age, the sub-editor committed the cardinal sin of deleting my best line and using it as the headline. So this is ‘as-submitted’ rather than as published.

Based at England’s Globe Theatre, Shakespeare is clearly an aficionado of the round ball game. So could his ‘Taming of the Shrew’ make the switch to the oval ball at Nangiloc? The Bard was confident in pre-match interviews, claiming that ‘All the world’s a stage’.

The players weren’t so relaxed. With the Old Van theatre company fielding a mixed team of professionals and amateurs, word was that some of the players were ‘crapping themselves’, not having taken the field since high school speech night. But coach Fiona Blair wasn’t applying too much pressure, telling players at Thursday night training that if they didn’t know the game plan by now they should improvise. A refreshing touch in today’s over-managed game; no Crowbots in Nangiloc.

Supporters also approached the picturesque Nangiloc oval with trepidation. The playbills promised an Aussie Rules version of Shrew. Would there be a run-through banner instead of a curtain? Would we get to barrack? Would flooding or excessive rotations spoil the flow of the play?

Coach Blair smoothed the transition from Elizabethan England to regional Victoria by playing fast and loose with Shakespeare. The scoreboard on the far side of the oval said it all; Kate vs Pete. No longer Katherina and Petruchio, the opposing captains were toughing it out in a backblocks battle of the sexes.

As the players did circle work on the oval, the audience took their seats on the adjacent netball court. Play was physical from the first bounce, with the netballers and footballers alike pulling moves that would make Barry Hall blanch.

As a gang of netballers swung Kate head first like a battering ram into the side of a shed, it was clear that rough and tumble farce was the order of the day. Kate was a tomboy with major anger management issues. Her sister, Bianca, was a slack-arse moll. The first quarter, which featured the kind of girl-on-girl action you see in Roller Derby, was more Blair Bitch Project than Bard. 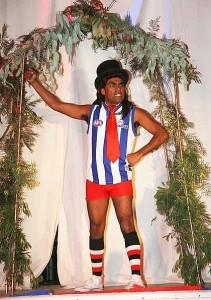 LeRoy Parsons as Pete Ruchio in the Old Van production of ‘Taming of the shrew’, Nangiloc 2010

Play picked up when Pete Ruchio, the new coach from Bendigo, hauled up in his ute. Every country football team has a gun player from the big smoke, and that’s what Fiona Blair got in drafting LeRoy Parsons for the role. Parsons had come to play. He was hard at the ball from the start and yappier than Stephen Milne. With this kind of on-field leadership, energy levels rose and the cast focused on the game plan.

Shakespeare’s text was adapted into a game of four quarters. The action moved between the netball court, the bush on the far side of the oval and the club hall. A sausage sizzle at half-time and a best and fairest award at the conclusion added to the colour. The downside of the outdoor performance was poor voice projection against a backdrop of mobile phones and fidgeting kids. The upside was the wow factor that only Mother Nature can deliver; kangaroos hopping across the oval as Pete did a spotlighted lap of honour in his ute at the end of act 3. (A couple of locals reached for their rifles before being reminded that this was Shakespeare, not Wake in fright.)

While Pete Ruchio subjected Kate to his own version of tough love, a supporting cast of suitors, all decked out in mullet wigs and Warwick Capper shorts pursued the delectable Bianca. The Shrew is an over-elaborate farce, with a false-start prelude and a knotty third act. Coach Blair has played it fast and loose, as farce demands. She let the team have its head, especially when it came to Black Adder-style rumpy-pumpy.

Players were occasionally undisciplined but no one was expecting a centimetre-perfect performance of Shakespeare. Fans like to see players taking risks. Fumbles are forgiven when a freak snap goes through the big sticks. Luke Western, playing Pete’s side kick Gregio (Grumio in Shakespeare’s original team list), took his cue from LeRoy Parsons and showed how bustling gusto wins out in the end.

Shakespeare demands that Kate tank the game in the end but, in this performance, her capitulation speech came across as a lukewarm rev up by a netball coach hooked on Dr Phil. That wasn’t the fault of Devon Taylor, in the role of Kate. It was more that setting the speech at the end of season dinner dance stripped it of the courtly character that tempers Kate’s surrender in the original.

In an inspired move, coach Blair introduced a Nangiloc couple who’d been married 47 years just before Kate’s big finish. What Blair realised is that the thing with Shakespeare is that you can grill him, you can fry him, you can curry him but he’s still Shakespeare. A direct intervention like this was the best way to remind the spectators that we’re living in a different world.

In a curious local twist, the name of Nangiloc’s sister city down the road is Colignan. That’s Nangiloc backwards. No one (well, no one at the Riverbend Tavern) could tell me how these mirror-image names had come about. But we’re all looking forward to the performance of ‘werhS eht fo gnimaT ehT’ at Colignan oval new weekend.