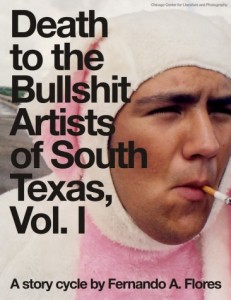 Sometime in the not-too-distant past the city of Donna, Texas spawned the unknown band ERIKKKLAPTON. They were a bunch of high school kids hammering out songs—‘Monkeyfuck evasions’, ‘Wonkaballs’ and ‘Oil mutant’—in a garage. Their chronicler, Fernando A Flores, tells us that ‘no songs were ever recorded nor did they ever gig—the only people who ever saw them play were the ins-and-outs getting stoned at that garage in Donna’.

Each of Flores’ short stories is underscored by a similar riff. In their own beer-swilling, bong-toking way, the lost bands of McAllen, Texas and its environs deliver cover versions of Honoré de Balzac’s ‘The unknown masterpiece’. Right now, somewhere out there in garageland, an unknown band is playing the perfect rock’n’roll song before surrendering, out of sheer ignorance of their achievement, to obscurity.

Flores has a fan’s eye for rock mythology, especially the various creation stories that speak, in awed tones, of the moment when the rhythm section clicked, or some kid leapt out of the audience to take over the vocals. Throughout, the urgent subtext is ‘You had to be there’. But there’s no there, there. The whole thing is a cannily constructed fable, a rock’n’roll version of Ossian. This story cycle delivers all of the character-types that rock’n’roll has pilfered from romantic literature—the outsider, the bandit, the troubled genius, the drug-fucked Peter Pan.

And Flores has the chops for the task. He conjures up brilliant band names—Bread8, Triple Helix, A Fish is not a Bull—and the best concocted lyrics since Don DeLillo’s Great Jones Street. Death to the bullshit artists of South Texas, vol. 1 belongs on a literary mix-tape with DeLillo, Roberto Bolaño’s Nazi literature in the Americas and Steve Earle’s Doghouse roses.

But in spirit the story cycle is closest to Patti Smith’s Just kids. At its core, the book is a reflection on the task of becoming an artist; more, of working at what kind of artist, if any, you want to be. The dream-like tale of ‘The house band for the Hotel Cuerpo de la Paz’ sees kids encountering first each other, then an audience, then the record industry before realizing that the art they make is for them alone. In ‘Bread8 v. Copal Brandt (R.)’, the eponymous band discovers, through a combination of accident and research, that music can do things in the world, can speak of community and politics, before settling on an unchanging, 8-song set played to a couple of dozen punters.

Flores’s bands stumble upon creativity, only half-comprehending the agency this gives them. They lurk around the edges of the culture industry before withdrawing into their own space. They recognize that they can become different, even transcendent, by making art, only to discover how grueling the defense of that difference can be. In a chronicle of lost, ephemeral and forgotten bands, Flores echoes Darby Crash’s anthemic summation of punk, romanticism and art: ‘Hidden deep in the furor/What we do is secret.’

Fernando A Flores, Death to the bullshit artists of South Texas, vol. 1, Chicago Center for Literature and Photography, Chicago, 2014 can be downloaded free online, or purchase a handmade hard copy from the same site.