Melissa Reeves’s play ‘Furious mattress’ was staged at the Malthouse Theatre, Melbourne in February 2010. It’s loosely based on the death of Joan Vollmer during an exorcism conducted by her husband in rural Victoria in 1993. I wrote this short piece for the theatre program accompanying the performances. The final line is spoken by one of the possessing demons. The play has since been published by Currency Press. 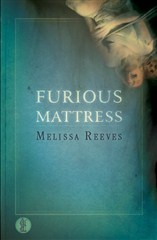 As a child, I spent many summer holidays at my grandparents’ home on the Spencer Gulf. The shoreline on their side of the small bay was cluttered with fibro beach shacks. Ramshackle and often abandoned, the shacks were nevertheless gaily painted and always redolent of beach holiday pleasures. (One, I remember, was even called ‘Spirit of fun’, with several boats, painted and named to match, moored nearby.)

The opposite side of the bay was different; a handful of isolated huts huddled on the skyline. Periodically, I’d gaze across the water, wondering what sinister behaviour or physical deformity lurked in those lonely shacks. I imagined the dark, distant buildings to be a kind of leper colony, a place of exile, the inverse of my shore (where a shack named ‘High jinks’ promised more cheerful misbehaviour).

Many years later, perhaps tiring of these Gothic fantasies, I finally asked my grandfather why the folk of Fishermans Bay were divided. His response was so banal as to be irrefutable; the prevailing winds simply made the opposite beach far less pleasant. A few huts had gone up early on the blowy side of the bay before common sense prevailed.

That was one of the many useful things I learned from my grandfather. There’s a lot in the world we’d like to attribute to evil forces. All children conspire among themselves to declare one dwelling in their neighbourhood the haunted house. All tourists have glimpsed a dilapidated homestead beside a lonely country road and conjured an image of the stoic pioneers, just like the ones in those Drysdale paintings, who once languished there. But most of the time, the tragedies and the ghost stories are only flights of fancy embellishing ordinary circumstances.

In Furious mattress I rediscovered something of the romantic imagination that had lead me astray in my childhood. At first, the characters seem driven by the same desire for the fiendishly picturesque that converts a failed farming venture into a gothic novel or an eccentric neighbour into a witch. But very quickly something concretely sinister appears, the everyday fear that makes an uppity spouse into a demon or a world that won’t turn to your will into a hostile, alien landscape.

Melissa Reeves suggests that everyday fear—a fear felt every day, a fear that sees evil in everyday things—outstrips fairy tales, fantasy, paranoia and even those occasional irruptions of the bizarre into domestic life that Freud called unheimlich (literally, unhomely). Everyday fear sees the world in genuinely Manichean terms; it’s not a case of dividing the world into dark and light but of assuming that material existence is irretrievably abject and inherently evil. In such a world, the world of Furious mattress, there can be no such thing as an innocent gesture, an idle comment or a quotidian object. A house doesn’t need a catastrophe to become a ruin, or a ghost to become haunted. When evil inheres in the business of living, romantic visions of picturesque decay or rural squalor are revealed for what they are, literary elaborations that tuck evil neatly away into scary bedtime stories. In Pierce and Else’s house, evil can’t be corralled so easily. It’s not extraordinary or unheimlich, it’s pervasive, everyday, normal. You can’t evict it, it’s in its home territory. Tell it to leave and it will reply with a home truth: ‘You command nothing. You command shit. Now fuck off’.